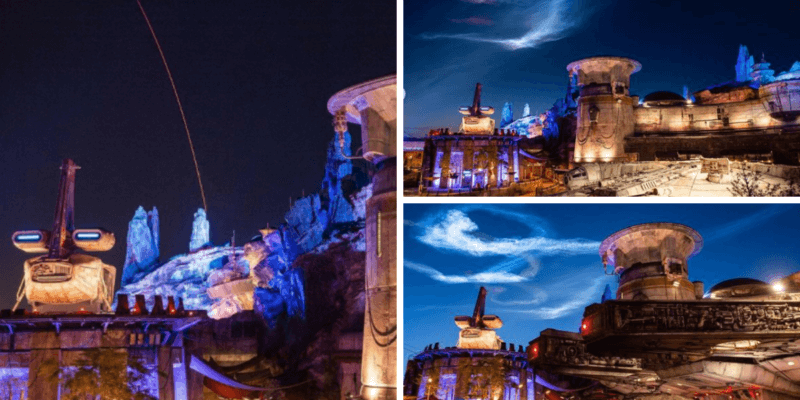 Walt Disney World is a magical place. Even from afar, Disney can catch a glimpse of the magic just outside their world. Thankfully, Disney photographers David Roark and Kent Phillips found the perfect opportunity to spot and share a rare sighting. Check out these amazing photos of SpaceX’s Falcon 9 rocket, with Crew Dragon atop, that shot into the sky early this morning in Galaxy’s Edge and Magic Kingdom park.

Just outside Walt Disney World Resort in Cape Canaveral, a momentous event happened. At, 5:49 a.m. from NASA’s Kennedy Space Center in Florida, four astronauts were launched into space on a NASA mission. According to Reuters, this event was aired live on NASA TV, but in case you missed it, Disney photographers shot some gorgeous images of the launch as seen from inside Star Wars Galaxy’s Edge in Disney’s Hollywood Studios and Tomorrowland in Magic Kingdom.

Not only was the launch a beautiful sight to see, but Disney photographers also captured many shots of the aftermath of the launch as seen from inside of Walt Disney World. These mysterious clouds after a rocket launch are called “night-shining” clouds, some of which were seen from Star Wars: Galaxy’s Edge. In my opinion, the one above Cinderella Castle in Magic Kingdom almost resembles a pretzel!

Are you on a Disney World vacation or local to Florida? We’re you able to see SpaceX’s Falcon 9 rocket today? Let us know in the comments below!

Are you planning a Walt Disney World vacation soon? Our friends at Academy Travel are EarMarked Diamond! Want to know more? Click the link to find more information and book a trip!