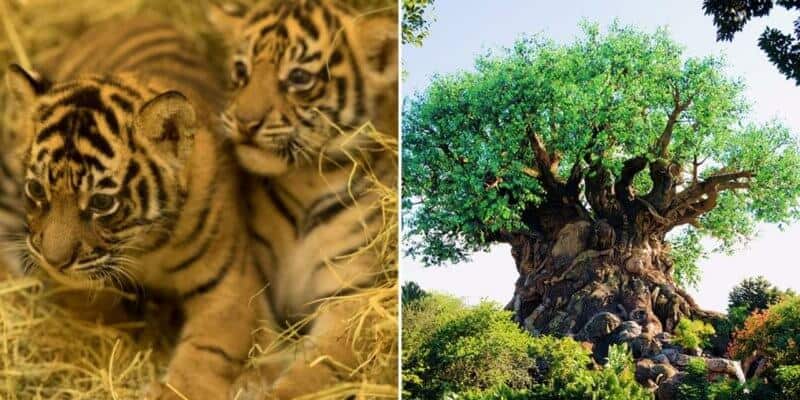 Back in August 2017, a beautiful event was celebrated in Disney’s Animal Kingdom — Two adorable Sumatran cubs named Anala and Jeda were the first Sumatran tiger cubs born at the park! The cubs belong to Mother, Sohni, and Father, Malosi, and have been watched closely by Guests at the Maharajah Jungle Trek.

Today we are sharing with our readers why these cute little cubs are extremely important and letting you know where Jeda can be found today.

The History Of The Sumatran Tiger

These gorgeous creatures play a very important role in the conservation as Sumatran tigers are actually an endangered species. Therefore, the birth of these two tiger cubs is described as a “remarkable event”. Disney Parks Blog shared the following information on these Sumatran tigers:

Disney’s Animal Kingdom is proud to play an important role in the worldwide conservation and understanding of Sumatran tigers, a critically endangered species. The birth of these Sumatran tiger cubs was a remarkable event that took nearly three years of planning through the Species Survival Plan (SSP), which is overseen by the Association of Zoos and Aquariums and ensures responsible breeding.

Fewer than 500 Sumatran tigers are left in the wild due to threats such as habitat loss, poaching and the illegal wildlife trade. Since 1995, the Disney Conservation Fund has provided more than $2.5 million to 14 nonprofit organizations working to protect tigers and their habitats in the wild. As a part of its focus on saving wildlife, the DCF is also helping the Wildlife Conservation Society and its partners protect tigers in Sumatra, Indonesia, by building support for tiger conservation, combating illegal wildlife trade and supporting community rangers who walked more than 5,600 miles in the last year to patrol 1,700 square miles of tigers’ forest habitat.

Where is Jeda Now?

The Sumatran Tiger, Jeda, who is now 3 years of age, has transferred to the San Antonio Zoo. This non-profit organization has maintained a future for wildlife since 1914!

As part of the Species Survival Plan, the zookeepers plan on introducing Jeda to a female tiger named Ja’Malle, who has been living at the zoo. Breeding these endangered species is critical for the survival of these beautiful beasts and it is so wonderful that Disney’s Animal Kingdom is reaching out a helping hand in playing such an important role in worldwide conservation.

The San Antonio Zoo took to Instagram to share a photo of Jeda along with some information surrounding their Species Survival Plan:

And on National Respect Your Cat Day, the San Antonio Zoo shared photos of both Jeda and Ja’Malle explaining how the two are a match made in heaven:

We’re so excited to see the progress of these majestic animals with the help of Disney’s Animal Kingdom and the Species Survival Plan. We look forward to seeing many more of these baby Sumatran cubs running around the zoo in the future.

Have you been lucky to encounter Jeda in Disney’s Animal Kingdom before her transfer to the San Antonio Zoo? Let us know in the comments below!

Are you planning your next trip to Disney’s Animal Kingdom soon? Click the link to learn more about how you can plan your perfect Safari adventure!