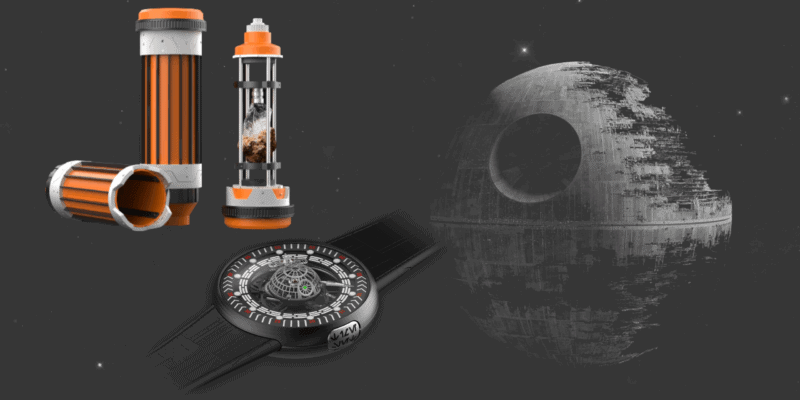 When we think of Star Wars merchandise, we often tend to think of things that are pretty affordable. After all, there are thousands of fans around the world and getting merchandise to everyone means that items need to be made affordably.

Ever since Star Wars: A New Hope released in 1977, fans have clamored for merchandise and memorabilia, which meant that Lucasfilm and their partners had to produce items that could be on store shelves quickly and relatively cheaply, for the most part.

There are, however, always exceptions to the rule and if you thought that the Death Star LEGO set was expensive, this new watch will make your eyes water.

The Star Wars x Kross Studio ultimate collector set is more than just the Death Star Tourbillon watch and also comes bundled with screen-used props. Only ten of these sets are being made — now you’re starting to understand why this set is priced at $150,000.

The set is made up of a replica Kyber Crystal container, movie prop Kyber Crystals used on the set of Rogue One: A Star Wars Story (2016) and a one-off watch design that is called “Death Star Tourbillion”.

The container that includes the watch and Kyber Crystals from the movie is a 1.2-metre replica of the orange cases used by the Rebels to transport the Kyber Crystals around the galaxy. Most of us know Kyber Crystals as one of the most important elements of a lightsaber. They also form part of the Death Star, powering its huge planet-destroying laser.

Inside the container are nine glass-sided capsules, one of these includes the movie Kyber Crystals used in Rogue One. One of the other capsules includes the Death Star Tourbillon watch and yet another capsule includes two additional straps for the watch.

Now, onto the watch itself. Designed by Marco Tedeschi (one of the founders of Kross Studio), the Death Star Tourbillon really is a thing of beauty. It includes a 45mm watch cast in black Grade 5 titanium with a tourbillon that hovers in the center and a time display that orbits around it.

A reminder that all of this can be yours for $150,000 and you can purchase directly from Kross Studio.

Does the Star Wars x Kross Studio ultimate collector set interest you? Let us know in the comments below!

Comments Off on This Insane Official ‘Star Wars’ Watch Costs $150,000