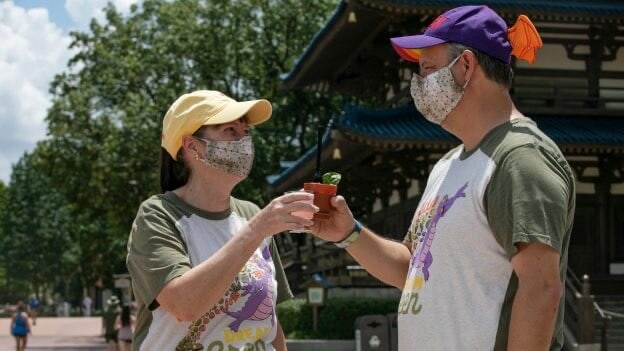 We are currently navigating strange times here at the Walt Disney World Resort. If you have experienced the changes that Disney World has made to operate safely during the ongoing pandemic, you know that there are many modifications as well as new rules, however, it seems that as each day goes by, things feel a little more normal.

Since the parks reopened, we have seen capacity slowly begin to increase with more and more Guests flooding the parks, more food options, extended park hours, and the return of Park Hopping — and it seems that Disney World is currently on a path to return to normal operations (though the parks and resorts are still implementing a variety of health and safety measures).

One big change that we saw with EPCOT festivals was that none of them were operating as a complete festival around the World Showcase.

That being said, it seems that EPCOT’s next festival will return with more of the typical festival offerings as Guests eat and drink around the World Showcase to eat all the EPCOT food!

Now that the International Food and Wine Festival has officially announced its return from July 15 – November 20, it also is coming back with its classic name, and it seems Disney has removed the “Taste of” prefix that we have gotten used to with EPCOT festivals.

We do not yet know specific details about the upcoming EPCOT International Food and Wine Festival, but it appears that Disney does not want to market this festival as an event that offers fewer offerings — or just a “taste of” what Guests are used to. Instead, it appears we could expect the Food and Wine Festival that we look forward to every year.

The biggest thing that EPCOT has been missing during its festivals, however, are the entertainment aspects that typically accompany them. Food and Wine usually bring live performances during the Eat to the Beat concert series with a lineup of all types of musical genres and artists. However, it seems musical performances by Voice of Liberty, the Jammin’ Chefs, and Mariachi Cobre, are what Guests can expect for entertainment, which is what we have come to expect over the last few “Taste of” festivals.

We have also previously reported that park capacity could possibly increase as we enter the summer months, so it seems that Disney’s return to normal is something they are gearing up for, and it starts by giving Guests even more to experience during EPCOT’s festivals. We don’t know for sure if theme park capacity will increase by this summer, but it could be a possibility.

Plus, there have also been studies that show people are now 47% more comfortable traveling, which is the highest percentage hit since the beginning of the pandemic. Also, considering that Walt Disney World is a top searched travel destination, it makes sense that Disney could feel inclined to bring back more “normal” experiences to the theme parks, especially as the vaccine rollout across America continues to increase and COVID-19 cases decrease.

Although things are seemingly returning to normal, there are still a lot of health and safety measures in place that make the park experience quite a unique one! Social distancing is not only heavily enforced on Guests walking around the park, but in queues, all Guests will always be six feet away from the party in front of them. Plus, mask wear also enforced at the parks, and Guests can only remove their masks when actively eating or drinking. There are also plenty of sanitization stations all over the park.

Hopefully, as the state of the world begins to improve, Guests will have the opportunity to see entertainment and nighttime spectaculars such as watching Happily Ever After in front of Cinderella Castle, return!

When do you think that things will be back to normal at Walt Disney World?