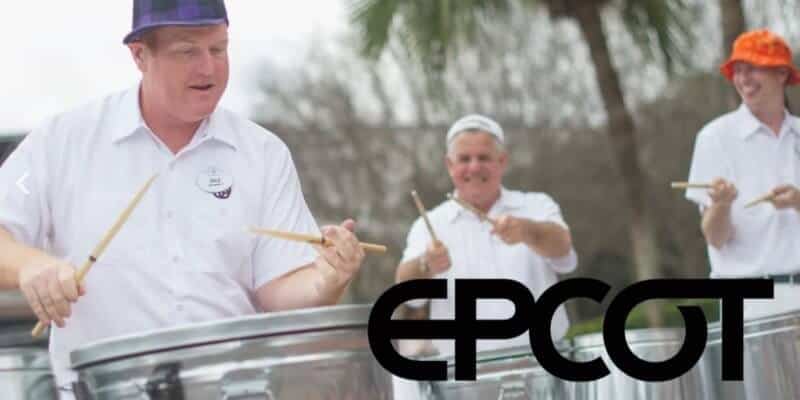 If you have ever visited EPCOT, you may have come across the famous funky group of JAMMitors.

JAMMitors is a janitor percussionist group who roam around the theme park in Walt Disney World. If you aren’t familiar with the musical group, the JAMMitors tend to make appearances in EPCOT on a daily basis and find items around the park to make their music.

Garbage cans, brooms, tin cans and more are used by the JAMMitors in order to bring a musical performance to the guests. But with the current temporary park closures, the musical group decided to take things into their own hands so they can still spread some positivity and Disney magic to their fans.

The JAMMitors know how much the Disney guests love their music and decided to make an at-home video by utilizing at-home supplies such as pots, pans, trash cans, and even an old tire, so people can still experience the fun within their own home.

The official Walt Disney World website describes the JAMMitors as:

The streets of Epcot are alive with the syncopated sounds of the funkiest janitors around. Using “found” instruments like trash cans, brooms and tin cans, these high-energy drummers will get you moving and clapping.

The JAMMitors aren’t the only ones taking to YouTube to help spread some Disney magic during the temporary park closures.

The Cast Members of the famous Disney attraction — The Jungle Cruise — decided to recreate iconic and memorable scenes along with the famous bad puns, from the comfort and safety of their own homes during the current pandemic. You can read more about the Jungle Cruise Skippers recreation here.

The Walt Disney Company also recently announced the launch of a brand new website, DisneyMagicMoments.com, which will be home to Disney content, stories and resources for kids, families and fans everywhere. You can read more about this here.

Within the website, fans will see content from Marvel, Pixar, Star Wars, Walt Disney Animation Studios, National Geographic, Disney Parks and more. This is where fans can find content — just like the JAMMitors video — including “Storytime With …”, #DrawWithDisneyAnimation, and a tour of the famous Disney attraction, it’s a small world! You can read more about the it’s a small world tour here.

We are all missing the Disney Parks during this time, but we have to appreciate everything The Walt Disney Company is doing as well as the Disney Cast Members to try and bring the Disney magic to all of us while staying at home and being safe.

Are you a fan of the JAMMitors? Have you ever seen them in person at EPCOT? Let us know in the comments.