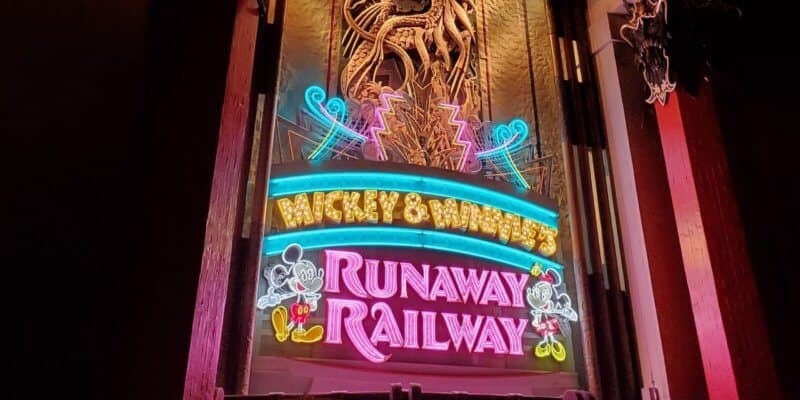 If you have been to Disney’s Hollywood Studios in the past year, you likely have been pulled toward the Chinese Theater by a neon light sign. When Mickey & Minnie’s Runaway Railway opened in March of 2020, Disney fans flocked to the attraction which was once The Great Movie Ride. One of the instant changes that could be noticed by Guests was the attraction signage which gave the ride a retro carnival feel, juxtaposing the classic design and architecture of the Chinese Theater.

Recently, we reported that Disney had filed a permit to have work done on the attraction. Although the permit did not explicitly explain what would be updated, the permit was to fabricate and install a sign contracted by Sign Producers, Inc. Knowing this, it seemed likely that the permit was filed to do work on the marquee.

Now, thanks to Drew (@DrewDisneyDude) on Twitter, we can see that new lighting has been added to the marquee area!

There are new lights on the Chinese Theatre behind the Runaway Railway marquee!

The theatre looks a lot better with this area illuminated now!

There are new lights on the Chinese Theatre behind the Runaway Railway marquee! ?

The theatre looks a lot better with this area illuminated now! pic.twitter.com/ll1fAs88ie

Previously, the signage that guided Guests into the queue for Mickey and Minnie’s Runaway Railway was bright, but the area surrounding it was not. The new added lighting definitely allows for a better view of the theater and marquee from farther away in the park!

We also reported that a second permit is set to “Provide labor, material and/or electrical for construction” and the work is set to be completed by Buena Vista Contractors, who often do construction for many Walt Disney World attractions and resorts. From the address, it seems that the permit is slated to take place in the gift shop area of the attraction, however, that is not certain.

Permits were previously filed for the attraction in January. Click here to learn more on those!

Follow along with Inside the Magic as we continue to keep on top of all updates happening at Walt Disney World Resort!

Do you like the added lights on the Mickey & Minnie’s Runaway Railway marquee?

If you want to visit Disney’s Hollywood Studios, you should plan a vacation today! Ride Slinky Dog Dash in Toy Story Land, live your Star Wars adventure at Star Wars: Galaxy’s Edge, drop 13 stories on Tower of Terror, and enter the world of Hollywood with one single Disney park ticket. Click here to meet Mickey Mouse and Minnie Mouse today!