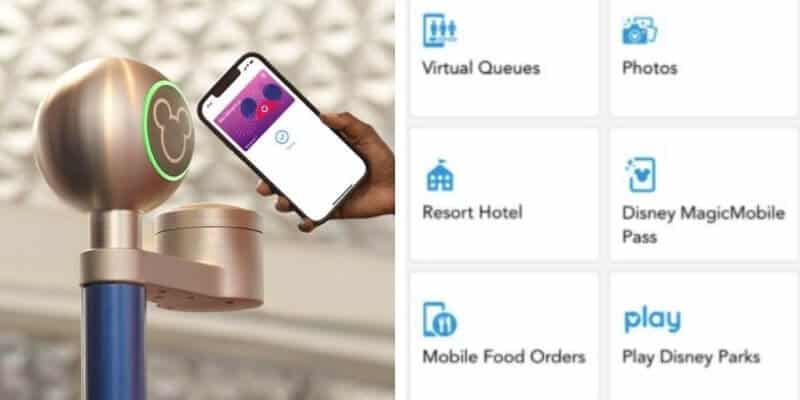 It wasn’t long ago that Disney World announced that a brand-new service will be coming to Guests later this year called MagicMobile.

In case you missed it, Disney’s MagicMobile service will allow Walt Disney World Resort Guests to utilize their iPhone, Apple Watch or another smart device to access features such as theme park entry. Disney describes its upcoming MagicMobile service as a “convenient and contactless way to access MagicBand features.” It’s a MagicBand alternative that will roll out this year.

The best part is that once the service launches, Guests will be able to choose between either their MagicBand or MagicMobile, depending on their preferences. Both devices can be used simultaneously as well depending on what is most convenient for you during your trip!

Additionally, our Editor-in-Chief, who resides in the United States, was also able to access the new MagicMobile feature after updating her My Disney Experience app this morning. Check out the screenshots below.

We do want to make mention that during the park closures last spring, a Virtual Queues section appeared on My Disney Experience, but it has not yet been fully introduced or rolled out. Therefore, even though we know MagicMobile is coming sometime this year, as Disney previously confirmed, the appearance of the feature on the My Disney Experience could mean it’s coming very soon, or, alternatively, it could still be a while before Guests can begin using MagicMobile.

It is also important to note that at the time of publication, although the feature is starting to appear on My Disney Experience, Walt Disney World Resort hasn’t yet shared when it will be available for use. So far, we just know it will be “launching in phases starting later this year.” Inside the Magic will keep you updated as we get information on MagicMobile.

Are you excited for when MagicMobile debuts? Let us know in the comments below.

Comments Off on MagicMobile, MagicBand Alternative, Teased in Disney App