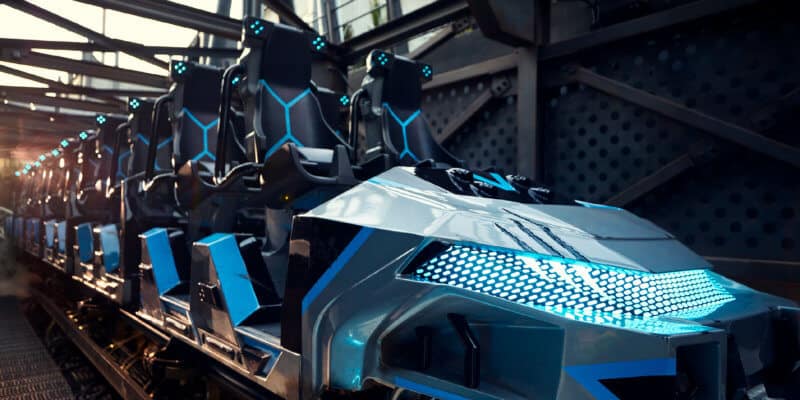 If you are a thrill seeker, you probably know that Universal Orlando is building a massive roller coaster in their Jurassic Park area inside of Islands of Adventure.

The VelociCoaster doesn’t have an opening date yet, but Universal is seemingly inching closer to revealing one every day. Some new developments around the coaster have happened this week, so let’s take a look at everything we know so far about the VelociCoaster.

The only coaster news you need today

The only coaster news you need today. ? ? https://t.co/tawYMdDtd6

The VelociCoaster is based on Universal’s Jurassic World film franchise. Although the latest movie in the series, Jurassic World: Dominion, has been pushed back to a 2022 release date, fans thankfully won’t have to wait that long for the VelociCoaster. Set to open this summer, Universal has been oddly silent on an exact date for the grand opening of their newest attraction — much to the dismay of fans who are waiting eagerly to know when they will get a chance to ride this new coaster (me included).

Here is what we do know.

Construction walls have come down around VelociCoaster, and it is beautiful. Fire effects have even been added and were testing recently at the entrance of the attraction.

Universal has recently released merchandise at Islands of Adventure for the VelociCoaster. This merchandise includes shirts, pins, lanyards, and more. Some merchandise even says “grand opening” so an opening day announcement for this ride attraction can’t be far behind.

Thanks to theme park fan @MichaelCarelli on Twitter we can see a bit of the VelociCoaster merchandise:

BREAKING! #VelociCoaster merchandise has been released today at Islands Of Adventure!

In addition to the merchandise, Universal was filming at the VelociCoaster recently! We cannot be sure of what that particular filming is for, but we are hopeful that it will be a commercial for attraction.

According to a Tweet from reporter @AshleyLCarter1, Universal set out signs to share with Guests that the area near the VelociCoaster was a “hot set” meaning filming was taking place. You can see that signage as well as a film crew in the background.

Hot set today over by the Jurassic World VelociCoaster at Universal’s Islands of Adventure.

Hot set today over by the Jurassic World VelociCoaster at Universal’s Islands of Adventure. pic.twitter.com/2RoUrxZSAA

It seems as if fans are just days away from an announcement from Universal on the official opening date for this attraction. But why is it taking so long?

Perhaps because of the ongoing pandemic, Universal is taking extra precautions when it comes to opening a new attraction. As we have seen in the past, when a new attraction opens at Universal it can draw insane crowds. While Universal has not confirmed if this attraction will be soft-opening, we speculate that it could be possible that we could see multiple days of soft-openings to help thin out the crowds on the day VelociCoaster officially opens to the public.

The use of a virtual line system is also a possibility, but again, Universal has not given any confirmation on how the opening day of VelociCoaster will be handled — or when it will take place. We’ll report back when we learn more.

Are you excited about the opening of Universal’s VelociCoaster? Let us know in the comments!

We can help you plan the perfect Universal Orlando vacation — click here for more details!

Comments Off on What’s New With Universal’s VelociCoaster This Week?