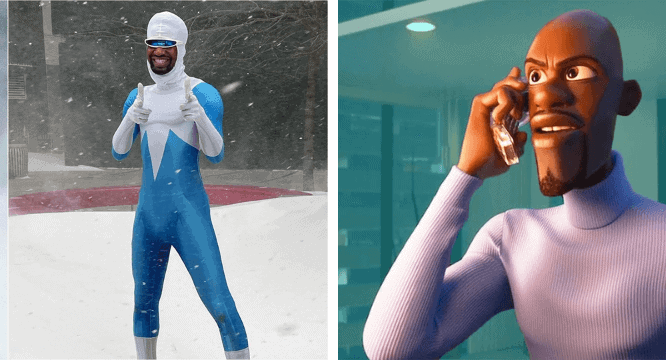 Sure the cold never bothered Elsa, but do you know who you’re forgetting? Frozone! The original cool cat from The Incredibles and The Incredibles 2 has our hearts frozen (in a good way) with his slick moves and super suit. Now in real life, a professional cosplayer has finally helped Frozone find his super suit and spread some joy in the Disney community.

The Nor’easter storm hitting the tri-state area this week sowed worry all around, but a cosplayer with some amazing gear saw an opportunity to play around with Mother Nature.  Naiquan, a cosplayer with quite the wardrobe, took to the streets and found a gusty place to take some perfect photos! The New York wind between buildings helped to create picturesque photos of swirling cold, while Naiquan played the part with icy perfection.

It almost looks like Naiquan is creating the snow and ice as Frozone!  When asked by Cosplay Central why he wanted to portray Frozone, “CosPlayNay” explained that “he felt like he connected to the character.”

“Aside from my love for The Incredibles, I strongly feel more black super heroes need to be recognized, acknowledged and shown on the silver screen,” he told interviewers at Cosplay Central. “Frozone is one of the coolest characters (no pun intended. He’s tall, dark, average build, funny, witty, stylish, loves the kids, loves the people and overall a character/person a lot of people can genuinely relate.”

While cosplayers such as Naiquan typically create fun and friendships at massive Cons like Anaheim’s D23, NYC’s ComicCon, or Atlanta’s DragonCon — those conventions have been postponed or canceled for quite a while due to the pandemic. Naiquan is excited for them to return, so he can interact with people and resume the “meaningful friendships” his costumes and opportunities to travel have created.

Here, we see CosPlayNay’s initial tweet where he shared the now-trending snapshots of his winter escapade:

Naiquan seems to be continuing to have a lot of fun with his Frozone character, giving a new meaning to “Netflix and Chill!” You can follow CosPlayNay’s next looks on his Instagram or  Twitter account.

What do you think about CosPlayNay’s Frozone look? Leave us a comment below!

Comments Off on Real-Life Frozone Finally Finds His Super Suit