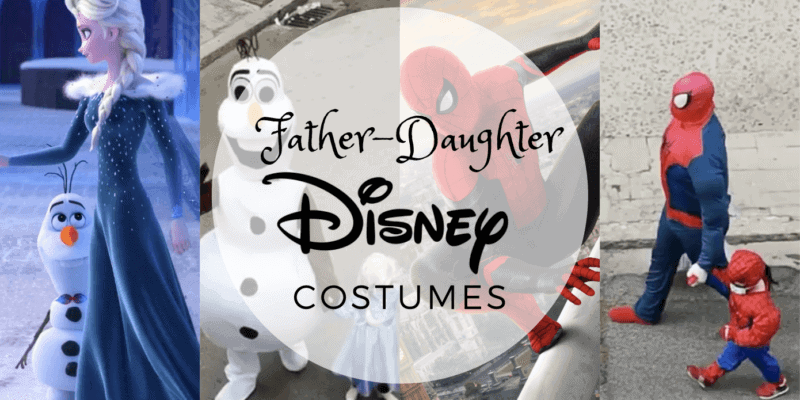 With the bathtub challenge and other quarantine photo ops running rampant on social media, just about everyone is looking for a reason to get dressed up right now (even if they have absolutely nowhere to go).

Three-year-old Mara and her father Jaime from Puertollano, Spain have taken dress-up to a whole new level while they are staying home. Since the father-daughter duo’s only daily outing is to take their trash bags and bin to the curb, they’ve begin making the most of their driveway trek by wearing Disney costumes every day!

Jaime has been sharing the pair’s Disney attire on his Instagram page.

So far, they’ve taken out the trash dressed as everyone from Disney Princesses to Marvel Superheroes.

Here, Mara and Jaime walk their trash bag to the curb as Belle and Beast from the iconic ballroom scene in the animated version of Beauty and the Beast.

In another foray into the Disney Princess universe, little Mara looked adorable as Rapunzel while Dad dressed as Pascal in a chameleon onesie!

We also love Jaime and Mara’s Spider-Man costumes, which we’re sure Tom Holland would be proud of!

The final Walt Disney Animation costumes the father and daughter have donned on their daily trash runs are none other than Elsa and Olaf!

Little Mara and her dad aren’t the only Disney fans to get into character to take out the trash.

Facebook user Danielle Askew looked ready to launch into “Let It Go” in her trash day attire. We can’t get over the fact that even her trash bin is wearing a tutu!

Instagram user @Miss.Patty.Bakes also got into the spirit of trash day Disney costumes with her Princess Leia ensemble. Patty makes a convincing Leia Organa and her trashcan looks great masquerading as R2-D2.

Last, but certainly not least, is Instagram user @classycoutureofficial’s version of Carl from Pixar’s Up. This impressive Disney character costume is sure to bring a smile to your face, even if Carl looks grumpy as usual pushing his trash can.

The only way is UP even in bin isolation ??

With Princesses, Star Wars, Marvel, and more represented here, are you inspired to put together your own Disney trash day costume? Tell us what you’re going to wear to participate in quarantine trash day dress-up!

Comments Off on Father-Daughter Duo Dress as Elsa and Olaf, Spider-Man, & More to Take Out Trash!