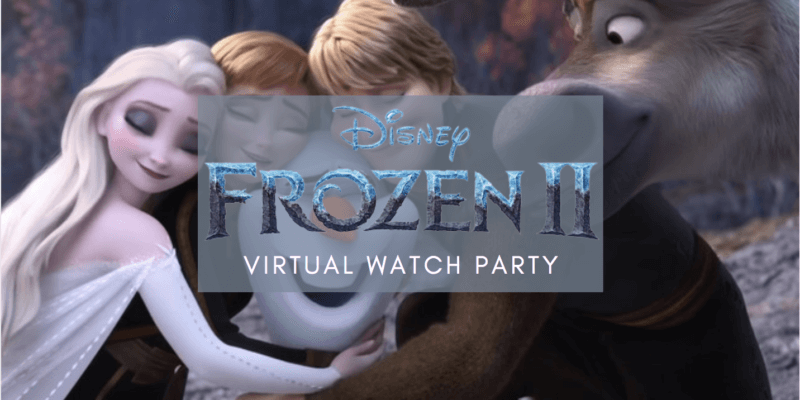 Disney is following-up their previous #shopDisneyMovieTime events, which featured The Little Mermaid and Moana,  with a Frozen 2 watch party this Thursday evening, May 21, at 5 p.m. PT/8 p.m. ET!

shopDisney has created an official Facebook event page for the virtual Frozen 2 watch party. To join in with your fellow Frozen franchise fans, you’ll need a Twitter account and you should be following the official shopDisney Twitter page to experience the fun.

The Facebook event for the virtual Frozen 2 watch party invites Disney movie lovers to, “Join us for an adventure into the unknown!

The post continues, “On Thursday, May 21st we wrap up our watch party series with Disney’s Frozen 2. Tune in on Disney+ at 5pm PDT and follow along with us on Twitter!”
To engage with other fans during this Twitter movie viewing party, simply use the #shopDisneyMovieTime hashtag on all of your Tweets as you watch the second Frozen movie.
If this is the first time you’ve taken part in an online watch party, you’ll catch on quickly! These social media events are a great way to enjoy favorite Disney films with other fans while movie theaters remain closed to the public.
Remember, this is your final chance to make magic moments at home with a shopDisney online movie watch party, so don’t miss out. Whether you’ve seen the ultra-popular Frozen 2 film dozens of times already or this will be your first viewing, you’re sure to enjoy Anna, Elsa, Kristoff, Sven, and Olaf’s adventures.

If you’re going to watch Frozen 2 with hundreds of other Disney fans around the country on Thursday night, there’s no better excuse to add extra magic to your evening!
Since the weather is warming up and Olaf the snowman’s favorite season is almost upon us, we’ve rounded-up some (literally) frozen treats inspired by two of Frozen‘s most popular characters. These Frozen Elsa popsicles are sure to be a hit with the entire family and we know you’ll love all four of these delicious Disney Cruise Line drinks inspired by Olaf!
Are you going to join in the Frozen II virtual watch party this week? Tell us in the comments!

Comments Off on Family Movie Night: Disney Is Hosting a “Frozen 2” Watch Party This Week!