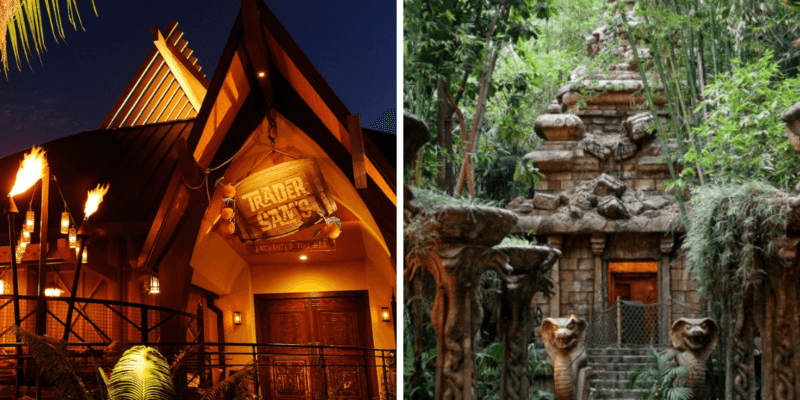 Many Disneyland fans who are missing being at the park are taking matters into their own hands by recreating their favorite attraction right in their home. One fan decided to mix two hot spots, one from inside Disneyland Park and one from over by the Disneyland Hotel, to create an awesome at-home attraction.

But before we take a look at the incredible projection mapping, let’s look at what exactly Trader Sam’s and Indiana Jones Adventure are all about.

Trader Sam’s Enchanted Tiki Bar is a fan favorite watering hole of Disneyland and Walt Disney World which many are wondering if changes will be made when refurbishments come to the Disney Park attraction, Jungle Cruise.

It’s the place to be at when visiting Disneyland, even when you’re not heading into either Disneyland Park or Disney California Adventure. It’s located right in the courtyard outside the Disneyland Hotel and the perfect atmosphere to quench your thirst with an adult libation. Disney Drinkin’: Trader Sam’s Favorites anyone?

Welcome, brave adventurers, to the wondrous watering hole of Trader Sam, head salesman of the Amazon. Sam is an expert at concocting head-shrinking potions and his travels far and wide allowed him to amass intoxicating ambrosial ingredients for his bubbly brews. Skip on over and try them for yourself-if you dare!

All around you are mementos of Sam’s exploits and trademark humor. You may very well laugh your head off!

Watch in wonder as the walls start to shake with volcanic eruptions all around you as you sip exotic elixirs of untold potency. You may not be able to shake the feeling that the tiki gods are watching you…

As one of the most popular Disneyland Park attractions since its opening in 1995, Guests to this day will endure long wait times to go through the queue of the cursed temple or attain a FastPass to ride this attraction, which is based an Indiana Jones movie.

Many have also experienced the curse of the temporary doom of this Adventureland attraction that happens when the ride is temporarily unavailable. Well, one of the Disneyland officials announced in 2019 that Disneyland crews would be giving this thrill ride a much-needed refurbishment in 2020 which has many wondering if this refurbishment has happened while the theme park remains closed.

The official description of this ride reads:

Follow Indy’s footsteps into the crumbling Temple of the Forbidden Eye past intricate booby traps. Inspect carvings and frescos that tell the story of Mara, a powerful deity who promises great treasures-and vengeance to those foolish enough to gaze into its all-seeing eyes.

If you find yourself in jeopardy, only one man is brave enough-or crazy enough-to save you… Dr. Jones!

Those who have taken a ride on Disneyland’s Indiana Jones Adventure will know about the projection room that you wait in during the queue leading up to the fast-paced thrill ride.

The Temple of the Forbidden Eye will bring you either eternal youth, earthly riches, or visions of the future, but I don’t think anyone could foresee such an incredible fan-created mash-up of Indiana Jones Adventure and Trader Sam’s.

Been trying my hand at some projection mapping in my Trader Sam’s-inspired basement bar. Here’s an effect for the Mara’s Eye, inspired by Indiana Jones Adventure. from Disneyland

The final results brought nothing but kind words and praise from fellow Disney fans! One Reddit user, this_knee, said:

Wow, this is after a few tries? Jeeze! Amazing! Looks really professionally done.

While another Reddit user who goes by NaturalizedWerewolf wrote:

Ummm, how do I get an invite!?

And evanridpath shared their thoughts saying:

The original poster shared this in reply, noting that fans can view more on the bar’s social media accounts @kakaucanteen.

What do you think of this fan’s work? Would you want to be invited for a drink over at their house? Let us know what you think in the comments!