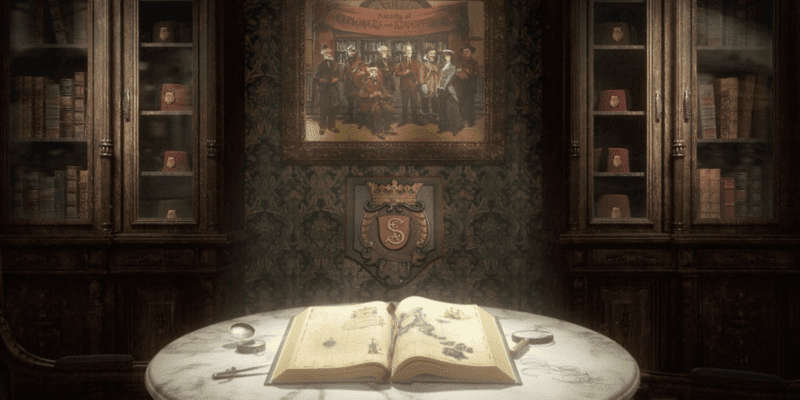 Are you a Disney SEA fan? Or perhaps a member of this Secret Adventure Society? If you don’t know much about this growing undercover Easter Egg bonanza, we suggest you start here with the history of the Disney S.E.A Society and how it has grown into Disney Parks canon over the years.

But if you’re already in the know about this incredible fan club, you may have seen the news that Disney+ is creating a television show for its streaming platform all about Disney SEA and its characters. The episodic will work with Disney Imagineers who created these now-beloved personalities to write a “franchise for streamer Disney+ that is set in Disney’s beloved Magic Kingdom. The first project in the works as part of the so-called Magic Kingdom Universe is The Society of Explorers and Adventurers, which is set in a world where all the themed lands and characters of the Disney parks and classic films actually exist in another reality.”

But what if another fan had already done this??? That’s exactly what happened.

Robert Dastoli, the owner of Dastoli Digital and his wife Katie Woo, have toiled endlessly on a treatment for a pilot based on the Disney SEA Society. A few years ago, he and his wife had developed a SEA show of their own with the full intention to pitch it to Disney+ for a series. After creating a full story arc, plot synopsis, character breakdown, and even a timeline based on Disney Parks canon, the Dastolis were never able to get the pitch into the right hands of someone at Disney+.

With the official announcement last week regarding the upcoming Magic Kingdom TV series, Dastoli and Woo’s journey has ended. Robert Dastoli still, “wanted to show what we made to those who would appreciate the lore and content of what we were trying to achieve.”
Despite his project coming to an end, Robert Dastoli is still a working member of the film and television industry. He has used his incredible “visual and technical know-how” to develop and pitch a full-sized trailer on a pea-sized budget. Take a look at the visual and audio creation, which brings “many recognizable S.E.A. elements to life.”

Did you catch some of those international Disney Parks Easter eggs? How about the Prometheus Volcano from Tokyo DisneySEA? Certainly fitting for the first episode!

Did you see Harrison Hightower’s Hotel?  Or the Steamboat aptly named Endicott II, with Endicott being the name of the Tour Guide (Beatrice Rose Endicott) at the Hightower Hotel?! There is so much to see packed into this creative short.

Dastoli also shared with us his full pitch documents describing his entire show. The Disney SEA show would have taken place in the mid 1890s, in the few years before the aforementioned Harrison Hightower disappeared and before Mystic Manor (owned by Henry Mystic) opened to the public.  First, the full SEA timeline as created by Walt Disney Imagineering.

The full pitch from Robert Dastoli starts with this cover letter.  “The Society of Explorers and Adventurers is a live-action adventure series centered around a heroic team of youthful adventurers on their quest to uncover magical, ancient artifacts. Taking place in the 1890s, we introduce original adolescent main characters set against the backdrop of a Victorian-era society previously established by Walt Disney Imagineering.”

Robert Dastoli knows that with so many true Disney Parks enthusiasts “working in production, and with the guiding light of Imagineering, […] they can create something that will really bring the S.E.A. to life in a way that inspires and entertains just as much as the existing Disney theme park attractions do.” It’s obvious his passion for the project and the Disney story is real. Here is his breakdown for main characters, both heroes and villains. These include Penny Mystic, Brock Dakkar, Chuck Lindsey, and Lim Chu. Lining up on the baddies side are Lady Chevalier and her henchman, Scalzi.

As promised, the Pilot Treatment is an extensive four-page document, found in its entirety here. It follows Penny Mystic on her initial journey starting at a secret dig site with Lord Henry Mystic.

Hungry for more of the fan-created SEA action? Dastoli included a Season One Arc, which is what writers and showrunners typically follow to create the episodes within a season (after the pilot). It also includes some example episodes that the show’s creator would like to see. We’ll have to see if the Disney+ show picks up on any of these really fun scenarios.

Next up, plan a trip to the Disney Parks to find these Disney SEA stories for yourself! Contact Academy Travel to search for your best deals and the adventure of a lifetime!

Would you love to see this Disney SEA show come to life? Leave us a comment below!

Comments Off on Disney Is Creating a SEA Show, But Hardcore Fans Already Did