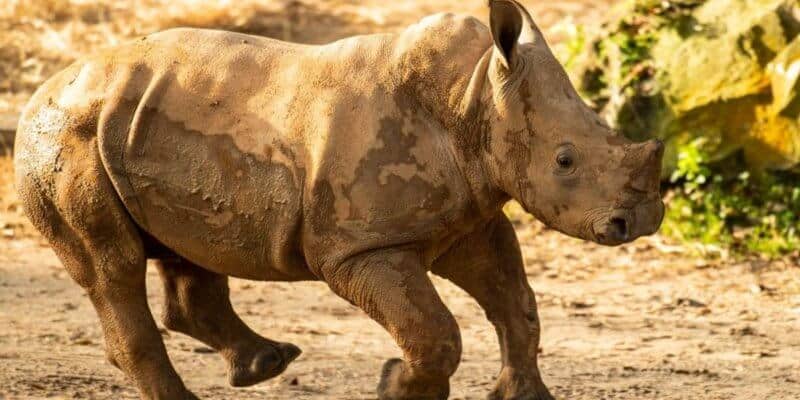 Tuesday, February 23 was a big step for the most adorable baby rhino around — Four-month-old white rhino calf, Ranger, joined the rest of the white rhino herd at Disney’s Animal Kingdom theme park.

Ranger and his mother Kendi, were released into the big savanna at Kilimanjaro Safaris to join the rest of the crash (a rhino herd). This is an important step for Ranger, since it is an important rite of passage for any baby animal born at Walt Disney World Resort.

The baby rhino’s day started off full of excitement and energy according to Disney Park Blogs.

“Ranger was eager to explore his new environment with his head high and ears up – plunging right into the mud alongside Kendi for a good wallow before running around to see all the new savanna sights. This rambunctious rhino calf made fast friends with his ‘aunties’ Lola and Jao, and mom Kendi kept close by to make sure Ranger stayed out of trouble,” stated Scott Terrell in the Disney Park Blog article.

It was back in September of 2020 that Disney Parks announced that one of the white rhinoceros, Kendi, was expecting the newest member of the Disney’s Animal Kingdom crash. And a little while later, the baby rhino (now known as Ranger) was born healthy and happy. During Ranger’s birth announcement, it was revealed that two more rhinos were expecting babies!

How excited are you to be able to see Ranger in your next Kilimanjaro Safari adventure at Disney’s Animal Kingdom? Let us know in the comments below.