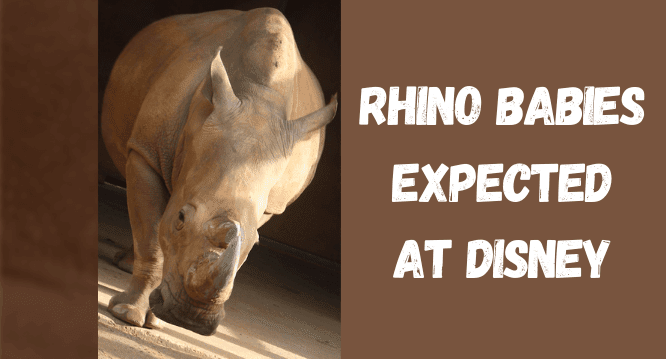 There’s big news on the Savannah at Disney’s Animal Kingdom! Today is World Rhino Day and Disney has announced quite the upcoming CRASH! (The word for a group of rhinos). Rhinoceros are the world’s second-largest land animal and among the most endangered animals in the wild due to poaching, but the Species Survival Plan Disney Cast Members follow are securing the future of these massive animals.

The Disney Parks YouTube page shares the great news with plenty of hoof action. The text associated with the video says, “We’re thrilled to share that Disney’s Animal Kingdom has big news for the future of rhinos – we have three pregnant white rhinoceros in our care. It’s the first time we have ever had this many horns and hooves on the horizon.”

Rhinos Lola, Jao and Kendi of Disney’s Animal Kingdom Park are all expecting litters next year. It’s the first time that the Park has expected so many babies at one time. The very first baby rhino to be born at Disney’s Animal Kingdom was Kendi herself in 1999, who is due this coming October (the first to be due of the three). The gestation period for a white rhino such as these is about 17 months, give or take. Jao is the next Mama to be expecting, due sometime in the Fall of 2021. Lastly, Lola is expecting her baby white rhino calf in the fall or possibly winter of 2021.

Dr. Mylniczenko is one of the Disney vets, following along the three mothers on their pregnancy journey, checking on them each day with routine checkups and exciting ultrasounds. Who doesn’t want to see these little ones growing?! Dr. Mylniczenko is working closely with the Rhino keepers to see how the pregnancies are progressing and is so lucky to see these tiny babies growing so often!

With humans gestating for 9 months, a rhino pregnancy at 16-18 months can seem like a lifetime, but it’s still shorter than the 2 years an elephant takes to create a baby! These timelines are considered when making the aforementioned Species Survival Plans (SSPs), which are overseen by the Association of Zoos and Aquariums to ensure the responsible breeding of endangered species. Each species at Disney’s Animal Kingdom must provide a plan and have it approved to continue the breeding process. For instance, the Hippos had a female brought from Europe to increase the gene pool of the Hippo population before it was grown, making sure that the calves were diverse in nature.

Dugan, the Rhino herd’s bull, is the father of all three calves and lives at Disney’s Animal Kingdom as well. When the babies are ready to be born, Cast Members will watch the mothers closely. The calves will weigh nearly 100 pounds at birth and can stand up within 60 minutes of being born. For the first few years (approx three) of life, they stick close to mom.

You can continue to follow these three White Rhino mothers on their journeys on social media at @drmarkatdisney on Instagram and @DisneyASE on Facebook. You can see more of the rhinos and the backstage scenes at Disney’s Animal Kingdom on Disney+ with the Magic of Disney’s Animal Kingdom debuting this month. You may have see the tussle of the White Rhinos during the ride attraction this month. It’s important to remember that these are wild animals and we are responsible for their care as we bring the species back from endangerment, and to respect their space! There’s sure to continue to be action on the savannah as we follow the White Rhinos through their journey.

Leave us a comment about what you think of the Species Survival Plan! We’re excited to see the new Rhino Babies at Disney!

Comments Off on Ready the Stork: Rhino Babies Expected at Disney