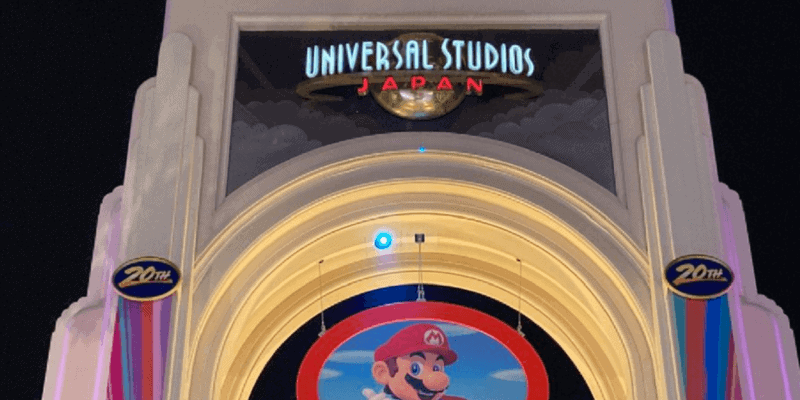 Super Nintendo World had its grand opening delayed indefinitely, but that hasn’t stopped us from getting excited about the new expansion! Universal Studios Japan added some major decorations around the entrance of the theme park in anticipation of the grand opening. Despite the delay, it appears that the decorations will stay to help keep excitement up over the new land.

Let’s take a look at the decorations and discuss our thoughts on the possible opening date of Super Nintendo World.

Featuring two brand new attractions that immerse you into the world of Mario and friends (Koop’s Challenge and Yoshi’s Adventure), Super Nintendo World is highly anticipated by fans of both Universal and Nintendo! Here are some photos that fans took to Twitter to share of the decorations that can now be seen at the entrance of USJ.

Twitter user and Universal fan Mikko Obscura (@mikkoobscura) shared a photo of the entrance archway during the day time that now features a massive Mario sign hanging from it. Additionally, you can see the banners on the lamp posts around the entrance that highlight the upcoming 20th anniversary of the park, as well as feature characters from the Mario franchise such as Bowser Jr, a Goomba, and Yoshi.

Here you can see a more up-close picture of the Goomba banner next to the 20th Anniversary banner, thanks to Universal fan usj_adventure (@usj_adventure) on Twitter.

And lastly, we have another post from usj_adventure (@usj_adventure) of this stunning nighttime photo of the Universal Studios Japan arch illuminated, with the Mario banner!

So, when could Super Nintendo World open? While the grand opening was put on indefinite hold, Universal Studios Japan has been held soft openings or previews for Super Nintendo World. They have asked those who get this behind the scenes look at the expansion NOT to post any pictures or videos on social media platforms until the land has its official grand opening.

This likely means that Super Nintendo World is ready to open as soon as it has more appropriate timing given the ongoing pandemic.

You can read our full guide on what to expect when Super Nintendo World opens here!

So what do you think about these new decorations, and when do you think Super Nintendo World could open? Let us know in the comments!

We can help you book the perfect Universal vacation, click here for more details.