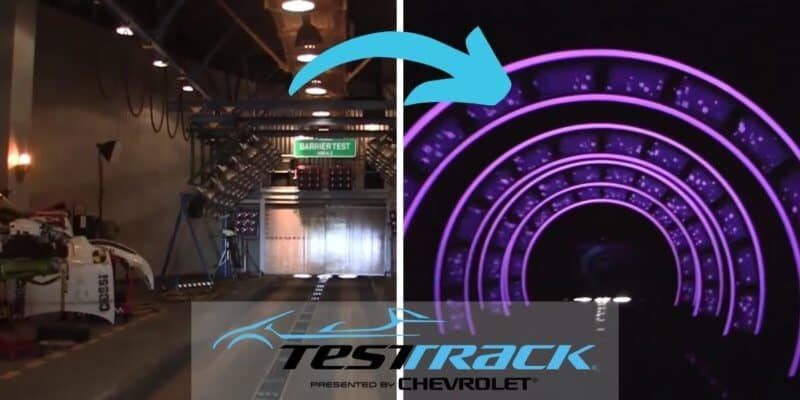 In 1999, EPCOT brought us the ever-popular attraction, Test Track, thrilling Guests of all ages. But 13 years later in 2012, it underwent some renovations as Disney Imagineers reimagined the ride and debuted what is now referred to as “Test Track 2.0.” Though each takes Guests through the testing of ride vehicles, both versions of Test Track are very different.

After experiencing both attractions time and time again, I have no shame in admitting that I miss the old version — and I would love to see Disney World bring it back.

The original version of the attraction was amazing — Guests were able to actually step into the process behind testing vehicles and learn what goes into it. As you entered the queue, samples of a repair and test shop were visible and videos showed vehicles undergoing tests. Additionally, small tests were demonstrated right in front of you involving test dummies, tires, and car doors. This amped everyone up for what was to come.

Within the briefing room (also known as the preshow) Guests were shown examples of tests being performed before the host, Bill McKim (played by John Michael Higgins), informed Guests that they would be able to partake in some of these road and car tests — demonstrations were even shown on short videos, too.  Lastly, he told the technician to choose one final “surprise test” when Guests then saw a video of a car crashing into a barrier right before the doors opened and Guests proceeded to enter the loading area.

It was then time to get into your ride vehicle and complete the testing. Guests went through the series of tests as if they were the test dummies, seeing how certain aspects of the vehicle worked in certain climates and under certain conditions. The ride vehicle was brought through things like hill climbs, anti-lock brakes, suspension tests, and more, with the final test being the “crash” test where Guests accelerated towards a cement wall, which opens last minute and takes Guests on a high-speed ride around the building.

If you don’t remember, or never had the chance to experience the original version of Test Track, check out our ride through video here:

Personally, I absolutely loved this version of the attraction. It had an amazing storyline, incredible details, and really made you feel immersed in the experience. In my opinion, Guests don’t get the same thrilling feeling from the new version of the ride.

After being renovated, the new queue showcases different Chevrolet vehicles as some of Chevrolet’s employees discuss the design process for cars. This gives Guests inspiration for when they are able to build their own cars (which is what replaced the preshow).

After riders build their sim-cars, they are moved into the next room — the loading area. Guests will board their sim-cars and then will witness the car that they designed go through four different tests — capability, efficiency, responsiveness, and power.

The track is pretty much (if not) the same as it was prior, however, it is much more futuristic and there is really no explanation like there was in the older version.

Here is the newer, updated version of Test Track 2.0:

Though I like being able to build your own car, I feel as though this version of Test Track is nothing compared to the first one. There really is no storyline, there is no explanation while riding through the tests, and the atmosphere just feels very random to me. The first version of the attraction provided a much more immersive experience than the current iteration does.

Again, I just really miss the old version of Test Track. Personally, I feel as though the older attraction had so much more of a storyline, anticipation, explanation, and purpose.

I do love being able to build your own car as well as the neon light throughout the new version; however, there really isn’t much of a storyline and while Guests are on the actual attraction, there is no explanation whatsoever. If Disney brought back the old version of the ride with some modern enhancements, it would provide Guests with an immersive, thrilling feel — and perhaps it would be much more memorable.

What do you think? Do you miss the old version of Test Track or are you a fan of the new one? Let us know in the comments below.

Editor’s Note: The opinions stated in this article do not necessarily reflect the views of Inside the Magic overall.