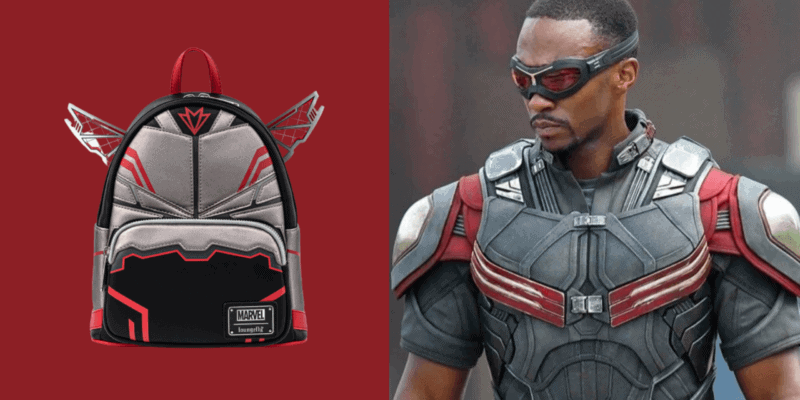 Now that The Falcon and the Winter Soldier is getting closer to release, we’re starting to see more merchandise hit stores celebrating what is, up to this point, (arguably) criminally underrated characters who have had pretty limited merchandise releases in the past.

This new Falcon Loungefly backpack may be tied for first place for the best-looking merchandise featuring Sam Wilson that we’ve seen released so far — the Funko POPs are also incredible!

Before we even get to the price there’s something we just have to talk about first… THE WINGS! We love that the mini backpack features the wings that make Sam Wilson ‘The Falcon’. We know that you’re unlikely to want to have the wings out at all times (only in case of superhero emergencies) so the great news is that they fold nicely away if you need them to:

The mini backpack which can be purchased on Her Universe retails at $74.90 and, in addition to the wings that swivel, features zip pockets and adjustable straps.

There’s a lot to look forward to for fans of The Falcon with the Disney+ series debuting in just a few weeks on March 19. Here’s a reminder of what to expect from the show:

After being handled the mantle of Captain America at the end of Avengers: Endgame, Sam Wilson teams up with Bucky Barnes in a worldwide adventure that puts their abilities to the test as the fight the anarchist group, the Flag-Smashers.

Obviously, Anthony Mackie and Sebastian Stan are reprising their roles but we also have Daniel Brühl returning as Baron Helmut Zemo and Emily VanCamp as Sharon Carter.

Will you be purchasing this backpack in anticipation of the upcoming Disney+ show? Let us know in the comments below!

Comments Off on New Loungefly Falcon Backpack Soars Into Action