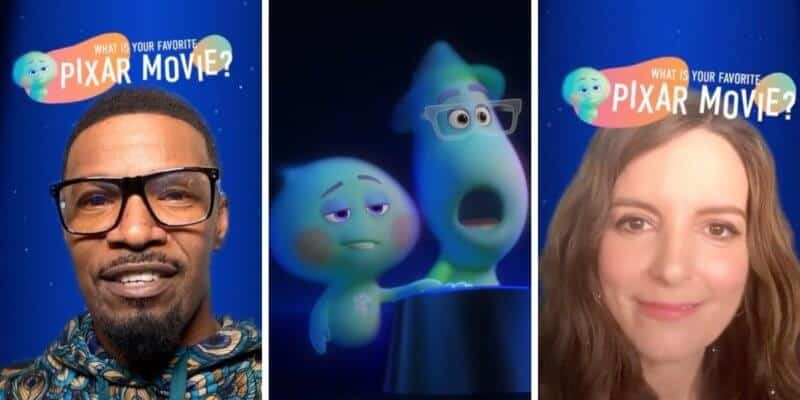 What is the meaning of life? What is my purpose? What makes my life have value?

Pixar’s latest film, Soul, has already touched so many lives across the country when it released on Disney’s streaming service on Christmas Day. Starring Jamie Foxx as Joe Gardner and Tina Fey as 22, Soul delivers laughs, tears, meaning, and lessons as it tells the story of a “purpose in life.”

Though this is quickly becoming a favorite Pixar film for many, what are the two leading actors’ all-time favorite Pixar movies? Well, Foxx and Fey took to Instagram to reveal their answers. (Hint — Neither one says Soul!)

Jamie Foxx went first and when the Instagram filter landed on “What is Your Favorite Pixar Movie?” he responded with:

“Favorite Pixar movie is Up. I love that movie. Really. I mean it’s something about that little old man, man, that just made me feel warm inside. Up!“

Next was Tina Fey, who also got the “What is Your Favorite Pixar Movie?” question on the Instagram filter. Her response was:

“What is your favorite Pixar movie? Toy Story! I gotta say Toy Story.”

You can watch both videos on Pixar’s Instagram below.

If you haven’t yet seen the Pixar film, the official description reads:

What is it that makes you…YOU? This December, Pixar Animation Studios’ all-new feature film “Soul” introduces Joe Gardner (voice of Jamie Foxx) – a middle-school band teacher who gets the chance of a lifetime to play at the best jazz club in town. But one small misstep takes him from the streets of New York City to The Great Before – a fantastical place where new souls get their personalities, quirks and interests before they go to Earth. Determined to return to his life, Joe teams up with a precocious soul, 22 (voice of Tina Fey), who has never understood the appeal of the human experience. As Joe desperately tries to show 22 what’s great about living, he may just discover the answers to some of life’s most important questions. Directed by Academy Award® winner Pete Docter (“Inside Out,” “Up”), co-directed by Kemp Powers (“One Night in Miami”) and produced by Academy Award nominee Dana Murray, p.g.a. (Pixar short “Lou”), Disney and Pixar’s “Soul” is streaming exclusively December 25, 2020 on Disney+

Soul is now streaming on Disney+. If you aren’t yet signed up for the service, you can get started here.