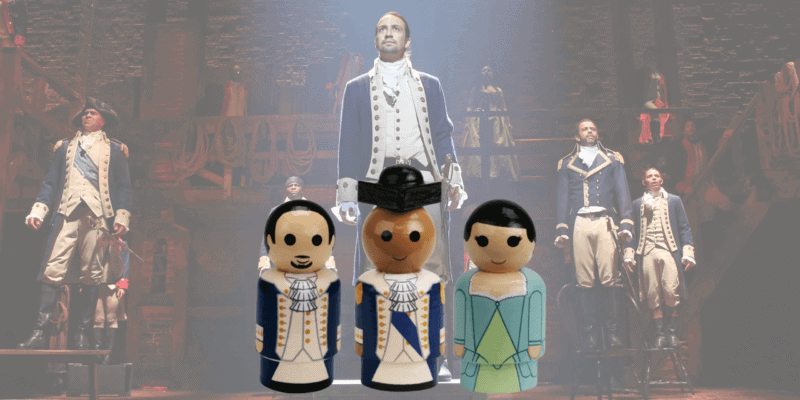 Let’s be honest, Hamilton rose almost from nowhere to join the ranks of the biggest musicals of all time and now you can make your home the room where it happens, all thanks to the new miniature wooden collectibles of Alexander Hamilton, George Washington, and Eliza Schuyler — played by Lin-Manuel Miranda, Christopher Jackson, and Philippa Soo, respectively, in the original Hamilton cast.

These new wooden collectibles are perfect for those wanting to expand (or start) a Hamilton collection or looking to grow an existing Pin Mates collection (there have been other Lin-Manuel Miranda Pin Mates before).

Related: Hamilton Gets Bad News Ahead of 93rd Oscars

These figures have been designed with s retro style that are reminiscent of wooden figures from the 1960s and 1970s and even come with their own window display box. Check out out the Hamilton Pin Mates wooden figures below:

We love the attention to detail that has been put into each of the characters. You can very quickly compare the likeness between the Pin Mates wooden collectibles and the real-life counterparts.

Those of you who collect Pin Mates will be pleased to hear that each character in the set is uniquely numbered on the bottom (alongside the packaging itself). Alexander Hamilton is S16, George Washington is S17, and Eliza Schuyler is S18 and they all fall into the Silver Series Pin Mates collectors line.

Related: Hamilton Set to Be First Musical Back on Broadway

The set isn’t being released until May but you can pre-order now from Entertainment Earth for $29.99.

Hamilton is the story of founding father Alexander Hamilton and is based on Ron Chernow’s biography with lyrics by Lin-Manuel Miranda, direction from Thomas Kail and choreography by Andy Blankenbuehler. It took the world by storm when it first appeared on Broadway and a recording of the show featuring the original cast has since been enjoyed by thousands of fans on Disney+.

Will you be purchasing these Hamilton Pin Mates? Let us know in the comments below!

Comments Off on Wooden ‘Hamilton’ Collectibles a Must For Any Musical Fan!