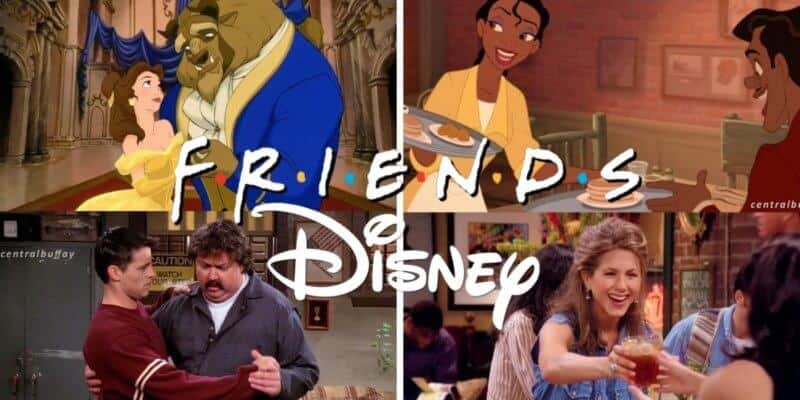 So no one told you life was gonna be this way…

If you are a huge fan of both the hit television series Friends and Disney, you’re in the right place. Instagram user @centralbuffay took their love for both Friends and Disney and mashed them up into what is quite possibly the greatest thing we have ever seen.

We bet you never pictured Rachel Green and Tiana as the same person. Or what about Ross Gellar and Aladdin? Well, after you see these mash-ups, you’re never going to be able to get these scenarios out of your head.

@centralbuffay shared this Instagram post with a swipe through of several different side-by-side images showing scenes from Friends and scenes from classic Disney films and they match up perfectly.

We went ahead and titled these amazing Friends and Disney mash-ups as if they were individual episodes.

The One Where She Realizes She’s a Princess

In Tangled, Rapunzel takes the crown and places it on her head, and is almost in shock, like she knew it was meant to be. Well, @centralbuffay used that scene from Tangled and placed it alongside the scene from Friends where Phoebe does the same thing and it’s quite possibly the greatest thing ever.

The One Where She Must Defend

Here we are with another Phoebe Buffay scene, this time from the episode “The One With The Ring” where she is aiming a gun, which is being compared to Moana, who is holding her paddle as her defense weapon.

The One In The Ballroom

We all know the iconic “Tale as Old as Time” scene from Beauty and the Beast. Well, in this hilarious comparison, we see Joey and Treeger as Belle and Beast. In case you can’t remember, during the episode “The One With The Ballroom Dancing,” Joey is forced to help Treeger learn how to dance after he threatens to have Monica and Rachel evicted.

The One With The Frying Pan

Frying pans, who knew? Well, it looks as though Joey knew about using frying pans as weapons way before Rapunzel did.

The One Where They Fell in Love

In these two adorable scenes, we see two different couples falling in love with one another. Ariel and Eric are sitting in the boat during the scene of “Kiss the Girl” while Monica and Chandler are sitting in the living room, professing their love for one another right before they get engaged.

The One With The Monkey

We all know Aladdin and Abu as an iconic duo — but what about Ross Gellar and Marcel the Monkey? We think this one is pretty on point.

The One With The Waitress

And last, but certainly not least, we know Tiana is an incredible and hardworking waitress trying to save up to build her own restaurant. Well, Rachel Green is very similar to this New Orleans Princess. She may not be nearly as good of a waitress as Tiana, but she does work very hard once she is cut off from her dad as she tries to make a living on her own before becoming very successful working for Ralph Lauren.

Which one of these Friends and Disney comparisons is your favorite? Let us know in the comments below.

Comments Off on The One Where ‘Friends’ Meets Disney