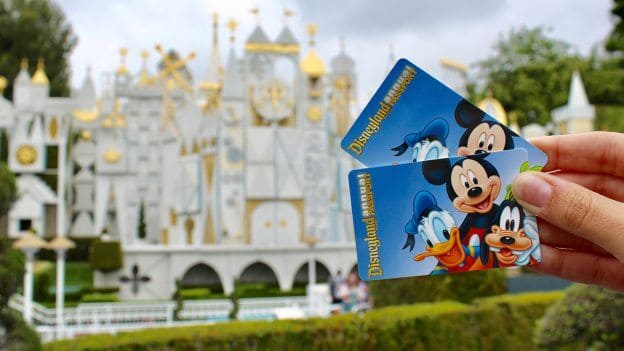 You can read all about Disneyland ending their Annual Pass program here.

Disneyland Passholders took to Reddit to share their thoughts and feelings about the Annual Passholder Program ending. You can read the entire thread from Reddit here.  Many had varying thoughts about the loss of their Annual Passports. However, the tone of positivity that the program will make a return in some form in the future shines through!

SecretSanta91304 noted that they could see the program coming back in the future:

I’d expect to see it back in some form in a couple years. I just dont think there is any way to manage the crush of APs that would want to get back in when the parks open.

Reddit user d_world_destruction commented that they also believe Disneyland could bring the Passholder program back eventually:

It’s going to be a logistical nightmare when the place opens again, and this seems like it should actually do SOMETHING toward easing that a bit

I know people’re going to be freaking out about this, but they’re going to bring it back eventually; they have to, they know how well it worked out for them the first time around

Others, like user sokali4nia, believe that if the program comes back it could be at a higher price.

Probably will come back in some from providing less access for a higher cost.

AveUnit02 says they had an Annual Pass for 11 years, but they agree with the move to end the program:

I’ve been an AP for 11 years and I totally agree with this decision. There was no way they were gonna be able to make AP’s happy and casual guests happy at the same time with their reopening plans. Reading some of these responses, you’d think they shut down Disney as a whole… Entitled much?

I know I’m against the hivemind, but this is a temporary solution to an initial problem they’ll have upon reopening. Y’all gotta relax.

Paintballer23 chimed in that they hope Disney will remodel the Annual Passholder Program if they choose to bring it back in the same form! This, however, seems unlikely, as Disney has already said a “new offering” is on the way.

Kinda Crazy that they are canceling annual passes. On the bright side though, Disney now has the chance to remodel the entire annual pass sytem. Honestly i would not be surprised if the new pass system would require you to make a reservation to visit the parks, no matter what level of pass you purchased. This would make controlling the crowds coming to visit much easier, especially on days like christmas and New Years where the parks are experceted to hit capacity. No longer giant lines at bag check and the main gates, just hopeing that they open up and let more people in on those very high capacity days.

If you were a Disneyland Annual Passholder check out our guide on refunds and partial refunds. There is a lot of information and it truly is all on a case by case basis but that guide can help your find out how much of a refund you can expect from your Disneyland AP.

Disney has said there will be another “membership” program coming to take the place of the Annual Passports but they have given any further details.

Comments Off on Disneyland Passholders React to AP Cancellation