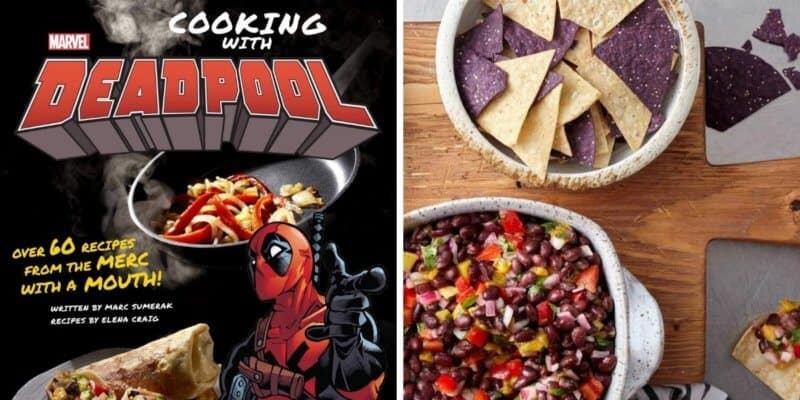 Calling all Marvel and cooking fans — Deadpool is coming out with a brand new cookbook and it’s something you won’t want to miss out on. With several different recipes, all described just as Deadpool himself would describe them, along with beautiful imagery, clear, concise instructions, and cooking tips and tricks — This cookbook is perfect for that Deadpool fan in your life.

I was able to get a first-copy of Cooking with Deadpool and let me tell you, it is such a fun and unique cookbook, especially if you are an avid Deadpool fan.

The upcoming cookbook features over 60 unique and delicious recipes, including several different chimichanga dishes (it wouldn’t be a Deadpool cookbook with chimichanga!) Additionally, the entire cookbook is written just as if Deadpool would have written it himself, but be warned, it may be a bit hard to decipher what exactly each recipe is at first glance. (I mean, do we ever really know what Deadpool is talking about?)

Well, I decided to try out one of the recipes for myself — the Krakoan Salsa!

This recipe called for 2 ripe avocados, the juice of 1 lime, one 10-ounce can of green chilies, salt, black pepper, garlic powder, olive oil, hot sauce, and fresh cilantro. So, I went to the grocery store, picked up all of the ingredients I needed, and got to work!

Overall, I found the directions for this recipe were pretty simple and easy-to-follow. It was two main steps, both of which were clear and concise and it only took me about 5-10 minutes from start to finish to make the Krakoan Salsa.

It may not be the prettiest looking dish but in regards to taste — it was incredible! It’s very similar to guacamole, except it has a bit of a kick to it (of course, you can add as much or as little green chilis or hot sauce as you wish, but I like my food a bit on the spicy side, so I added more than the recipe called for).

I can certainly see myself making this recipe again, especially for big events like Super Bowl, New Year’s Eve, or even a family barbeque. If you’re looking to impress your friends and family, I highly suggested making this Krakoan Salsa (and when they ask where you got the recipe, when you tell them a Deadpool cookbook I bet they won’t believe you!)

The official description of the cookbook reads:

Deadpool brings his inimitable style, foul-mouthed humor, and notorious skill with a blade to the kitchen in this hilarious take on a traditional cookbook, featuring classic recipes with a Deadpool spin and a whole lotta chimichangas.

No super hero takes food quite as seriously as Deadpool. In this gorgeously designed cookbook that paid reviewers have described as “glorious” and “the best cookbook I’ve ever read,” Deadpool offers his take on a curated collection of epicurean classics. Narrated by the wisecracking super hero (and sexy master chef) himself, this book also incudes recipes inspired by some of his closest friends/enemies (Here’s lookin’ at you, Spidey) and his favorite meals, including chimichangas, tacos, pancakes, and hamburgers with no pickles.

This comprehensive culinary guide is complete with recipe modification suggestions, illustrations, and mouthwatering full-color photography. This is the ultimate gift for seasoned cooks and Marvel fans alike!

Cooking with Deadpool will release on February 2, 2021. You can pre-order your copy today by clicking here.

Comments Off on ‘Cooking with Deadpool’ – The Perfect Cookbook for All Marvel Fans!