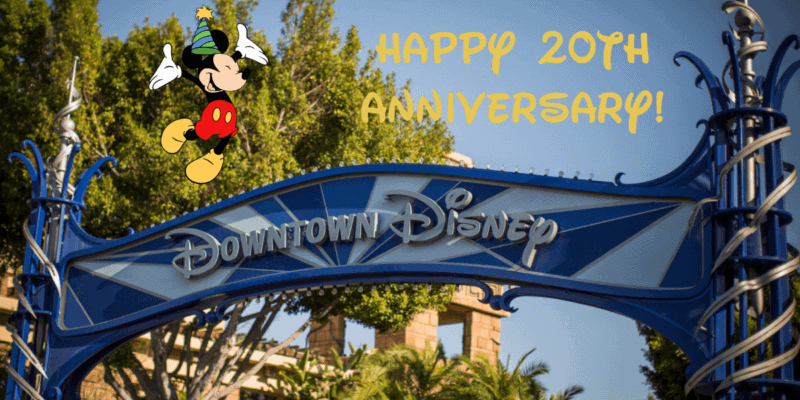 On this day two decades ago, January 12, 2001, Disneyland Resort opened its new shopping, dining, and entertainment mall, the Downtown Disney District for Disneyland Park Guests and those just looking to get a piece of Disney magic without heading into the park (or paying for a theme park ticket).

This remains true on this very day, especially since on its 20th anniversary, Downtown Disney (and, by extension right now, Buena Vista Street inside Disney California Adventure) is the only spot at Disneyland that is currently open to Guests and keeping the Disney magic alive. Disneyland Resort is not expected to reopen its theme parks and hotels until later in 2021. For now, let’s take a step back in time and see how Downtown Disney began and how far along its come.

Downtown Disney Changes Over The Years

Over two decades, things were bound to develop at Downtown Disney, as local Southern California news source the OC Register notes. Guests interests and excitement changes over the year and of course, Disney kept up with the demand. New stores and restaurants went in and some were removed. Stores that were once there that have since been removed are Build-a-Bear and Ridemakerz. Full and quick service restaurants that have changed are Y Arriba! Y Arriba! and Haagen-Dazs, but some existing restaurants even got an upgrade. The prior entertainment of House of Blues, ESPN Zone, and AMC Theaters are all no longer there.

This 20th anniversary year should have marked the opening of Disneyland’s fourth hotel where ESPN Zone used to stand right at the end of Downtown Disney. In 2018, that vision was discarded as taxes, permits, and other factors seemingly made this an impossible reality for the time being. Instead, we’re dazzled by the occasional pop-ups at this location.

Over the last year, it’s been a bit of whirlwind with the state of the world. After an extended closure, Downtown Disney District was able to start a phased reopening in July of 2020 which has even extended in Buena Vista Street of Disney California Adventure over the last few months. So, where is Downtown Disney at now? Here’s a full list of all the shopping, dining, and entertainment you can experience and savor. Grab your cup of coffee from one of the two Starbucks locations — yes two — and get going!

Note: Not all locations are currently open amid the ongoing pandemic. For the current operating schedule, visit the official Disneyland Resort website here.

With ever-changing pandemic-related orders and restrictions, there are many restaurants listed above that aren’t opening currently, but that isn’t stopping Downtown Disney from celebrating and encouraging Guests to come for a visit.

One of the original restaurants from opening day, Ralph Brennan’s Jazz Kitchen Express, is celebrating by offering 20 beignets for $20 for today only from 12-8pm. Snag them while they’re hot! We’re all missing those Disneyland beignets.

Twenty years ago today was a big day at the Disneyland Resort — we debuted the Downtown Disney District, a place for guests to shop, dine, listen to music and play outside of our theme parks. We congratulate the incredible businesses and amazing cast members who continue to serve our guests while the rest of the resort remains closed. Thank you for maintaining the magic!
#DowntownDisney