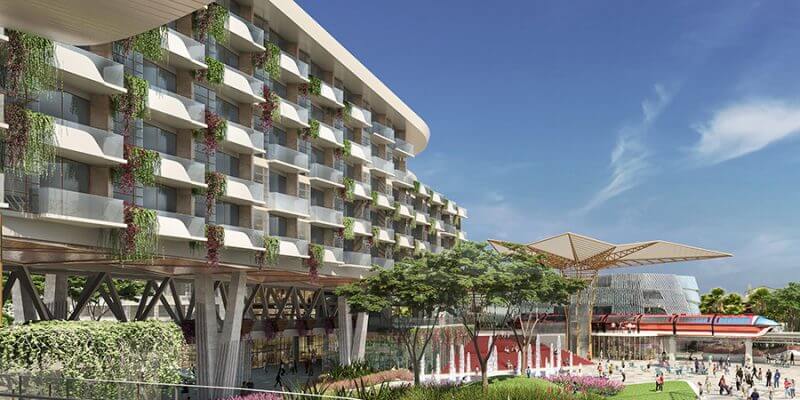 Though news of the expansion first came out last year, today Disneyland Resort finally officially announced its fourth on-property hotel and revealed some new concept art for the eye-catching addition coming in 2021 to the Happiest Place on Earth in Anaheim, California.

The name of the 700-Room Four-Diamond hotel has not yet been revealed, but according to Disneyland’s official statement it will “transform the west end of the Downtown Disney District and anchor a new gateway to the Disneyland Resort.”

Located on what is now part of the Downtown Disney District’s parking lot, the concept art indicates that this hotel will also take up the space now occupied by the Rainforest Cafe, AMC Downtown Disney 12, Earl of Sandwich, and ESPN Zone, although the fate of these businesses remains unclear. It’s possible the movie theater and themed restaurants will be going away for good, or will simply be incorporated into the new structure.

UPDATE: The Southern California newspaper The Orange County Register spoke with Disney representatives, who confirmed that these four businesses will be vacated from the Disneyland Resort property before the new hotel is build in that retail space. But the officials added that there is a possibility some of these “may operate inside of the hotel.”

Disneyland Monorail enthusiasts will also take note that the hotel will feature a “dedicated platform” inside the new building. Whether that means the edifice will be built around the existing Downtown Disney platform, or that a new station will be erected, remains to be seen. Guest rooms, public spaces and gardens will provide views of the Downtown Disney District. In addition, an upper-level restaurant and lounge will give guests a view of the popular Disneyland park fireworks.

The ground level of the hotel will include shops and restaurants opening onto an expansive landscaped plaza complete with playful water features, creating a gathering place for guests and visitors. The new hotel also connects all four Hotels of the Disneyland Resort through lush gardens and beautifully landscaped walkways, transforming the gateway on the west side and creating a welcoming entry for our Disneyland Resort guests.

Construction on the new hotel will begin next year (2018) and a grand opening is planned for the year 2021, two years after Disneyland’s highly-anticipated new Star Wars: Galaxy’s Edge area is scheduled to welcome guests for the first time.