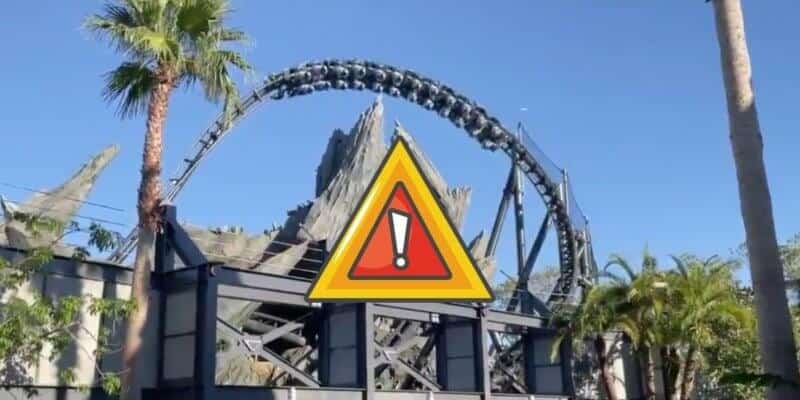 Universal’s VelociCoaster is progressing at a very fast rate, and with daily testing going on, guests are starting to see how this velociraptor is going to fly though the track. Now, we can see how the coaster moves through the jagged and intricate rock work, and it may have you nervous to ride!

Alicia Stella (@AliciaStella) took to Twitter to showcase the VelociCoaster riding though at Universal’s Islands of Adventure, and we can see how the coaster clears the pointed peak of the rock work, as well as it coming through the tunnel.

If we watch below, we can now see why the VelociCoaster track bends to an almost-upside-down position. When the coaster rides through at the current angle, the view appears to be a straight shot of the terrifying peak, and for a moment, riders may fear they will fall and impale themselves on it!

It also seems that the coaster slows down on this section, to really allow the rider to hold that sense of fear for a moment. If the coaster zipped by the peak too quickly, we would not be able to ride an acknowledge the danger.

The tunnel portion (although I say tunnel and it is more of a circle pass-through) uses the same idea of angles to bring the rider closer to the rock work. As we can see, the VelociCoaster track bends to a side ways angle, which brings the ride vehicle closer to the side of the rock work. For the rider passing through, it could give the sensation that they are about to hit the side of the rocks as the coaster turns.

If the coaster went through straight, it would have been quite distanced from the rocks which would have still been fun, but again, we would lose that sense of fear, which is exactly what the VelociCoaster breeds. From gravity defying moments, to terrifying animatronics, this coaster is meant to simulate a run with dinosaurs from Jurassic World, so intensity will be a given. Although the attraction will be a scary one, rest assured that everything Universal is doing will be with the utmost safety in mind.

If you want to be at Universal Orlando Resort next summer 2021 when VelociCoaster opens, click here and get started today!

Do you think you will be afraid to ride the VelociCoaster?