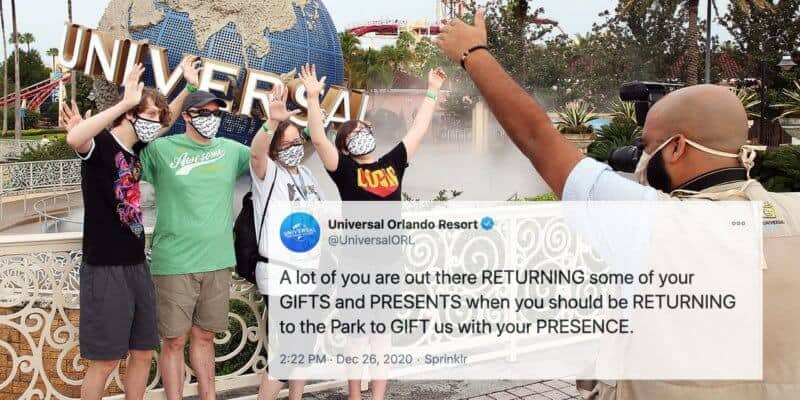 The Christmas season wrapping up means one thing: gift returns. As much as we would all like to believe no one would ever return a gift you gave them, we all know that is definitely not the case. It seems that the day after Christmas, many gift-receivers are ready to hit the mall and send back the unwanted presents they received, and Universal Orlando Resort is not okay with it.

Universal Orlando’s Twitter is infamous for cracking jokes, putting people on the spot, and really just breaking down the “professional” boundary between theme park and guest — which I personally love. Now, it looks like they are upset that guests are not visiting Universal Orlando today — allegedly because they are all too busy returning unwanted gifts.

Plus, it wouldn’t be a classic Universal Orlando Tweet if there wasn’t a cheeky play on words involved:

A lot of you are out there RETURNING some of your GIFTS and PRESENTS when you should be RETURNING to the Park to GIFT us with your PRESENCE.

A lot of you are out there RETURNING some of your GIFTS and PRESENTS when you should be RETURNING to the Park to GIFT us with your PRESENCE.

This past holiday week has been very busy for Universal Orlando Resort as both Universal Studios and Universal’s Islands of Adventure theme parks were hitting capacity nearly every weekday (a rare occurrence during the pandemic) faster than they ever had on weekends. Today, however, Universal has yet to make an announcement that the theme parks have hit capacity, which, after the past week, may seem odd.

Instead of encouraging guests to return, Universal Orlando decided to slightly shame them — and if anything it makes me want to return to their theme parks even more. After having The Grinch take over their Twitter account, it looks like Universal is going in the opposite direction with this Tweet making guests feel guilty for focusing on returning the gifts they received  — but really, they are just wanting people to come and spend some more time (and, perhaps, money) at their parks.

January is typically a slower month for theme parks, and with the ongoing pandemic, it will likely be a tough “slow season” to get through. So, Universal is seemingly using their Twitter to keep the guests coming to the parks in any way they can.

If you want to visit Universal Orlando Resort when the holiday crowds leave, click here to get started on planning your dream vacation to venture back and see dinosaurs in Jurassic World or fight off Volemort in the Wizarding World of Harry Potter.