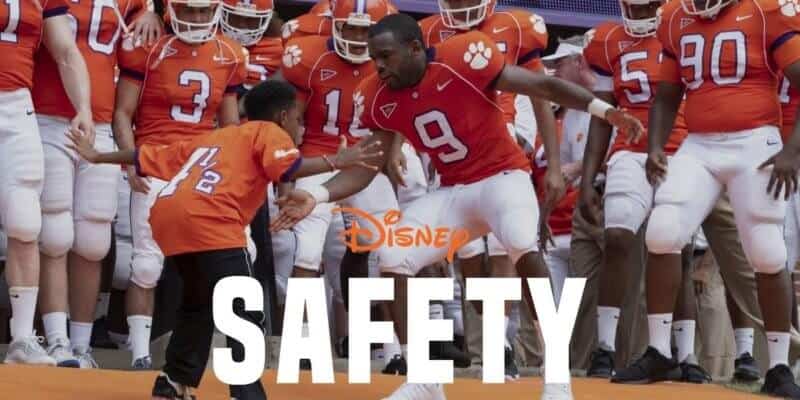 You’ve seen Remember the Titans, The Blind Side, Friday Night Lights, and now, you have to see Safety.

Even if you are not a sports fan, or more specifically, a football fan, everyone must see Disney+’s latest original film, Safety, which is based on a true story. The movie is the perfect balance of tears and laughs as it tells the true story of Clemson University football safety, Ray McElrathbey, who is a young man facing a series of challenging circumstances. With his dedication and perseverance, alongside his teammates and the Clemson community, he overcomes and triumphs these challenges and succeeds on the field while also having to suddenly raise and care for his 11-year-old brother, Fahmarr.

This film really portrays the story of inspiration and dedication, but it also shows how we need to be there for one another when your loved ones need you most, and that’s what the cast and crew really loved about this movie from the start.

During the media event for Safety, which Inside the Magic attended, some of the cast of the film, as well as the Director, Producer, and Ray McElrathbey himself, discussed how this film is more than just another football movie — It’s a movie about relationships, teammates and being there for one another when they need you most.

And the most important aspect — Sometimes your support system doesn’t have to come from your direct family. It can come from people such as neighbors, friends, roommates, teammates, etc. In fact, Corinne Foxx, who portrays Kayycee in the film, touched upon how those who really came through for Ray were those non-blood relatives. “And-and we-we’ve said this before that, um, family isn’t just blood relation, you know, and I think that’s what this movie is about.,” Foxx stated during the media event as she was discussing what really stood out to her about the film.  “There are all these people in Ray’s life that are rooting for him that aren’t necessarily blood relation but are there for him in that way. And-and Kaycee kind of acts as a big sister to even, um, Fah and Daniel and everyone else is-is kind of just all working together to-to be there for Ray.”

In addition, Ray-Ray McElrathbey himself touched upon how, especially in today’s world, we all need to come together and support one another — Blood relatives or not. “Um, as far as teams are concerned in society, I guess we go back to the-the two teams that mean the most at this current time which is the Democratic and Republican Party,” McElrathbey said during the press event. “ Um, and the importance of it in society is that currently those teams needs to come together as the United States of America and do something for everyone in America.”

“So to-to bring the importance of team to society, uh, the world needs help. Um, most of all, America needs help. And I hope them-those two teams get together and do it for the team that we are together, which is America. And so in-in society, I think that’s the important part of sport that needs to be taken part, where working together is needed and necessary,” McElrathbey continued.

So again, this film is so much more than just another football movie — It’s a movie that showcases a real-life situation and how we all need to be there for one another, no matter what. We need to come together to support one another. Allow yourself to trust those around you. Allow your support system to help you when you need it. Have one another’s backs and be there for each other, especially in today’s world.

You can watch the official trailer for Safety here:

Safety is streaming exclusively on Disney+ starting December 11th. If you aren’t yet signed up for Disney+, get started here.