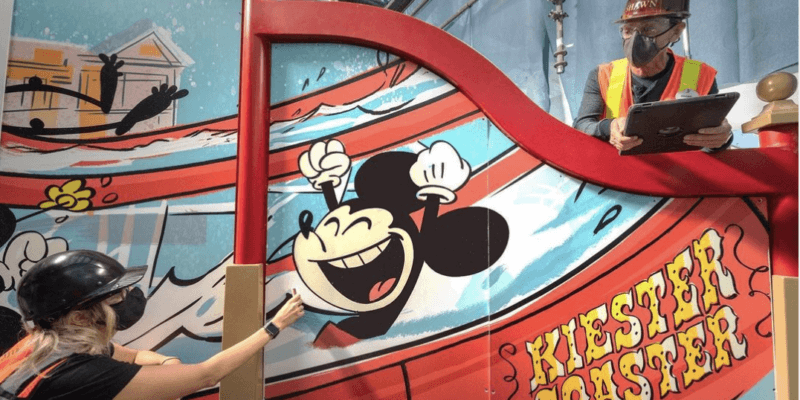 From the Walt Disney Imagineering account on Instagram comes a sneak peek at what we can expect to see on our jaunts around Crescent Lake and the BoardWalk area at Walt Disney World Resort. Just a few months ago, we reported on the terrifying Keister Coaster clown slide that dumped into the (family-friendly) Luna Park Pool being ripped out and chopped up for trash. Now, we’re excited to see our favorite mice, Mickey and Minnie sliding into fun!

UPDATE: Just a few hours after this article on the Keister Coaster Update went live, the Walt Disney Imagineering Instagram post was removed. We have captioned the original content below, and noted the misspelling of “Keister” in the photo.

While the construction was initially slated to end in the fall of 2020, workers continued to hammer away under scrims well into early December. We wondered if it would ever be finished as some Disney fans lamented the clown’s then-possible departure while others cursed his existence and hoped the “nightmare fuel” would never be seen again!

Disney itself eventually announced the following about the longer-term construction:

Luna Park Pool at Disney’s BoardWalk Resort may look a little funny as work takes place on the Keister Coaster waterslide. We expect the waterslide to be available again before the end of 2020—though dates are subject to change. Work in the pool area will continue through the end of this year. Luna Park Pool, as well as 2 leisure pools at this Resort hotel, will remain open during this refurbishment.

But now, check out this progress! We heard earlier this month that the coaster would indeed involve Mickey and Minnie, but HOT DOG, this visual is a lot of fun. First looks were revealed on Instagram today and we were ecstatic to see the new Mickey shorts-styled Mickey and Minnie sliding down the Keister Coaster in animated bliss.  (We can even see what we suppose to be Goofy’s feet in the upper left-hand corner! Perhaps we’ll see Pluto, too!) It should be noted that the spelling of “Keister” on the slide’s facade is mixed up to the misspelling “Kiester” and may have been the reason for the removal of the original Instagram post. Below, we have captioned the original copy and provided the photo by Walt Disney Imagineering.

The Imagineer’s caption made great use of puns as they mentioned the mice clowning around in the pool. Disney Guests at Disney’s BoardWalk Inn & Resort can expect to be clowning around with these mice soon!

Oh boy! Here’s a sneak peek of our Disney Imagineers installing the new graphic design on the Keister Coaster slide at Disney’s BoardWalk Resort at @WaltDisneyWorld. When the slide reopens soon, guests will have the chance to see Mickey Mouse and his pals clowning around as they splash down into Luna Park Pool.

This new Keister Coaster theme will be a lot of fun, true to the BoardWalk Mickey short, and ought to involve the beachside-boardwalk theme that we’ve come to love on the backside of EPCOT.

We will update Inside the Magic when Disney changes the pool to reflect the correct spelling of “Keister Coaster” and again when the pool officially reopens.

Will you be joining Mickey and Minnie on the new and improved Keister Coaster? Leave us a comment below!