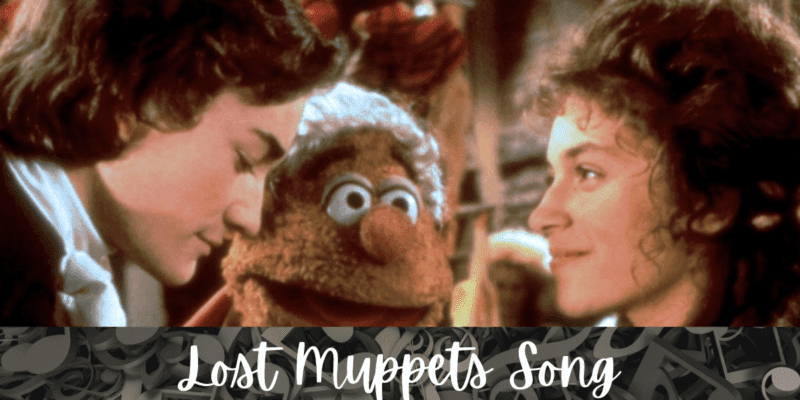 Recently, BBC News gave the world some extra holiday cheer. Here’s looking at you, Muppet fans. If you love Disney’s The Muppet Christmas Carol, get ready because this holiday film favorite is about to grow. A lost Muppet Christmas Carol song has been rediscovered! As a Muppet fan, any extra minutes of Muppet fun sounds fantastic – especially when it adds to the classic, Muppetational retelling of Charles Dickens’s A Christmas Carol. Although, you may have flashbacks of this song and wonder: how do I know about a lost song that just got rediscovered?

Why was This Song Cut?

This rediscovered Muppet Christmas Carol song was cut from the theatrical version of the film because filmmakers thought a love ballad did not fit with the other songs in the film. Plus, it was thought to be complex for young viewers: a primary audience for the film. According to director Brian Henson, son of Muppets creator Jim Henson, “The agreement was we would remove it from the theatrical release but then put it back in for all of the television and video releases from then on.”

However, the song was lost for quite a while. According to BBC News, the song was present in VHS versions of the film, but then the raw footage was misplaced, causing it to be left out of most DVD versions. However, I have a DVD copy of this film from 2012. My copy has an extended version of the film that includes this lost song. If you do not own an old copy though, don’t catch a case of the holiday blues! This song will be incorporated into all future releases of the movie.

So, what is this song? The song is called “When Love is Gone,” and seriously, get ready for all the feels. The song occurs when Scrooge is taken to the Christmas past where he and his former love, Belle, break up due to his obsession with his job. Belle sings this love ballad as her heart is breaking, and present-day Scrooge joins her ghost of the past, filled with emotion at the remembrance of what he lost. The cut song captures perfectly the feeling of lost love. It may even cause you to shed a few tears.

As previously mentioned, you may have seen this song before if you have an old version of this on physical media, such as a VHS or select DVD copies. However, if you have only seen a theatrical cut or the version currently on Disney Plus, this song will be brand new for you. Watch the deleted scene and its beautiful song on YouTube, included in this article.

Will This Song Be on the Disney Plus Version Soon?

The footage was just rediscovered and film specialists are currently converting this scene into 4K. Since this process is still occurring, we may not get to see the extended version of the film on Disney Plus this holiday season. But… the holidays are meant for miracles after all! Hopefully, Disney can add this scene just in time for a holiday viewing of The Muppet Christmas Carol. Brian Henson said of Disney’s efforts to add this update in time, “they can do it but they are going to have to scramble to do it in time.” Let’s hope that they do scramble and pull this together in time for Christmas.

If they don’t update the film in time, no need for Bah Humbugs. You should still stream the amazing Muppet Christmas Carol to celebrate the holiday season in the way only Muppets can: mixing tradition with silliness. Get the third greatest gift – laughter – this year from the Muppets by watching The Muppet Christmas Carol, now streaming on Disney Plus.

Are you excited for the reincorporation of this lost song? Have you seen this lost scene before? Let us know in the comments!