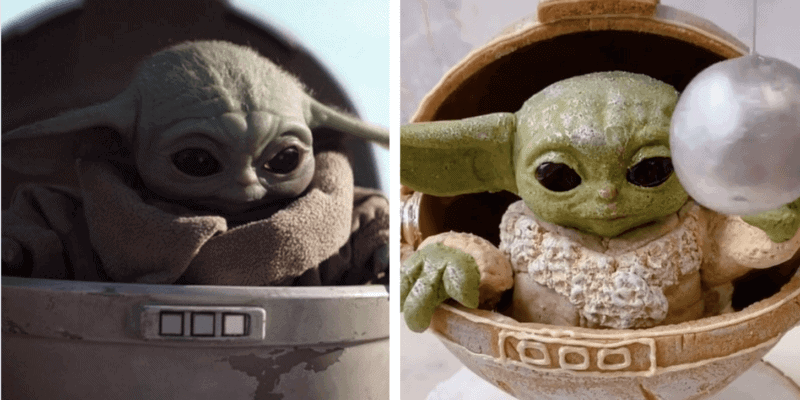 “Baby Yoda” has become a cultural phenomenon — even among many non-Star Wars fans — since he debuted on The Mandalorian. We only knew him as “The Child” (or “Baby Yoda”) in Season 1, but now we know his name, Grogu! Even though his name has been revealed, many are still referring to him as Baby Yoda, and what is the cutest little guy in the entire galaxy know for? Food. He loves to eat everything in sight from frog eggs to blue macarons so it’s only fitting for fans to make a recreation of Grogu in food form.

Liz Marek, an award-winning cake decorator, who is also known for sharing her work, recipes, and tutorials through her social media, blog, and online school named Sugar Geek Show. She took it upon herself to create the most ASMR Grogu food item we’ve found out there, gingerbread Grogu. Not only did she share her creation, but she also shared the how-to, so now all of us Grogu fans can try it at home!

In the video below, Liz shows you how to make silicon putty molds to form the dough from the recipe above to finish your gingerbread Grogu! Her baking instructions for the dough are to bake the pieces in the oven at 300ºF for 50-60 minutes. Keep an eye on the color — if you feel like they are getting too dark, you can take them out sooner.

Is anyone going to try their hand at making a gingerbread Grogu with the help of Liz? Personally, I’m going to leave it to the professional because if I tried, I might end up with a fail video that is far from nailing it.

Share with us in the comments below if you make a version that you love!