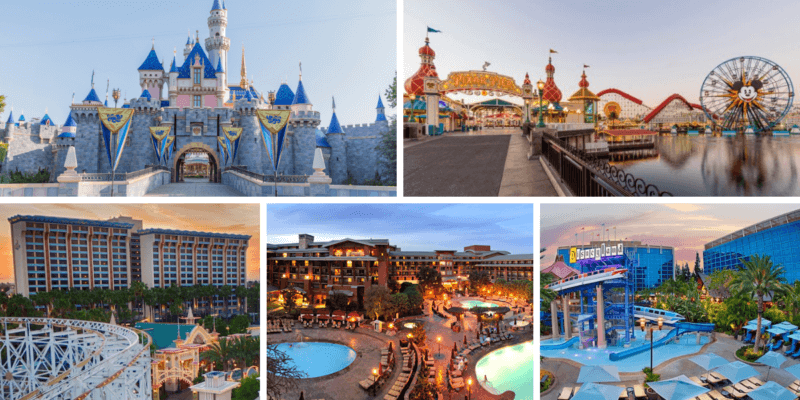 We’re three months away from the Disneyland Resort having closed their theme park gates for one year, and it’s looking like it will be close to then (or many more months) before we get to, as Anna would sing, “Tell the guards to open up the gate.”

In this time, Disney has been working extremely hard to find a solution to bring us back to The Happiest Place on Earth in a safe and enjoyable manner under the strict state guidelines for reopening theme parks. Disneyland fans and avid Disneyland goers have even chimed in with a variety of creative thoughts and ideas for ways for it to be possible for Disneyland and Disney California Adventure to open up again.

Southern California news source the OC Register shared the idea of Disneyland Resort creating a “Disney Bubble,” so we thought we would share some interesting points as well as our own thoughts regarding how this could be implemented.

Has Disney ever considered creating a Disneyland Bubble, how one would work, or if Guests would even be willing to go that far to visit Disneyland Park and Disney California Adventure?

Disney Parks weren’t the only things The Walt Disney Company had to shut down in 2020. Disney Cruise Line had suspended all of its sailings, and they still continue to be suspended into 2021 — and even canceled sailings longer than seven days through October 2021. Disney CEO Bob Chapek spoke recently on the strong demand to have a Disney Bubble to speed up the process of safely welcoming Guests back on board and sailing again soon. Is Disney considering this as a possible option for Disneyland, if the California state officials would agree to a plan like this?

Disney hasn’t mentioned a “bubble” approach like this for Disneyland, but let’s examine what it could hypothetically look like.

Having a Disneyland Bubble would be going even more in-depth than this. For those visiting the parks, a negative COVID-19 test would be required for entering the park and another test could be required at the end of the visit before leaving the property. It seems like a long process that would create a queue that’s longer than any attraction, like the “it’s a small world” Holiday queue. But are Guests willing to go as far as to take this extra measure to be once again walking down Main Street, U.S.A.?

Let’s also look at how a Disney Bubble worked at the Walt Disney World Resort. Well, it was really more of an NBA Bubble, as Guests who returned to the already reopened Disney World theme parks and hotels weren’t required to take the same measures as the NBA players and NBA personnel. In order to have an NBA season resume in 2020, Disney and the NBA partnered together to play the season with all 22 teams in Orlando, Florida on Disney property.

The NBA’s Disney Bubble consisted of creating a barrier around all facilities that were being used by the NBA restart including hotel, practice facility, practice courts, and all of ESPN Wide World of Sports Complex. The 22 teams were split between Disney’s Grand Floridian Resort, Gran Destino Tower of Disney’s Coronado Springs Resort, and Disney’s Yacht Club Resort. The league was able to complete the season without any outbreaks in COVID-19 cases so it was a success for them.

Could This Be a Viable Solution For Disneyland?

After we published the article on COVID-19 testing and how it could possibly open Disneyland sooner, we posed a question: Would you get rapid COVID-19 tested if it meant you could enter Disneyland Resort?

Maybe it’s possible that this Disneyland Bubble starts with only Guests who are staying at one of the Disneyland Resort on-property hotels so that a perimeter could be created around the entire resort. Guests would only be allowed to enter the theme parks if they had a reservation at one of the hotels. That comes down to the willingness of Guests to go through protocols and procedures like this, as they would essentially be quarantined inside of Disneyland. Though a lot of work went into it with the NBA players, they were willing to do it because it is their profession, and they got to play basketball safely, but are Guests willing to do it at their leisure — and pay for it, too?

Inside the Disneyland Bubble or Out?

In order for a Disneyland Bubble to work and still remain feasible for both Disney and Guests, the Downtown Disney District may have to be the one Disneyland Resort area that is off-limits to hotel Guests so that they wouldn’t be in contact with Guests outside the bubble. That way, it can also remain open for locals and non-hotel Guests to enjoy. If the Disneyland Bubble were only starting with the theme parks and hotel guests, that might be a good compromise so that as many people within a limited capacity could enjoy Disneyland at a safe distance.

What About the Cast Members?

If Disney did have Cast Members living on Disneyland Resort property, then it would probably look like what crew members abroad a cruise ship would do. Perhaps they could live and work on-property for an extended period of time, then have an extended period of time off. There might be some quarantining involved and a rotation of Cast Members coming through. Though many Cast Members might actually enjoy living on Disneyland property for some time, we’re sure many would prefer to be home with their families and doing something more like the first option so they could be back to work.