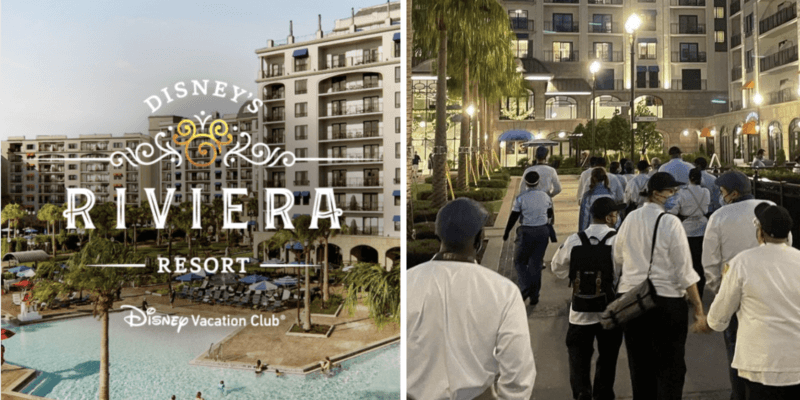 Last night — December 14 — Guests staying at Walt Disney World Resort’s newest hotel, Disney’s Riviera Resort, were evacuated after the fire alarms were set off for reasons that appear to still be unknown at this time.

The evacuation was detailed on social media. Instagram users Nathan and Coletta wrote:

Well! There is a first time for everything! We weren’t evacuated from a ride, but we were evacuated from Disney’s Riviera Resort earlier this evening! The cast members said it had never happened before! Was it a false alarm? We still don’t know!

Twitter user Drew shared these updates regarding the Disney’s Riviera Resort evacuation, which, as he shared with Spectee News, occurred at around 5:45 p.m. on December 14. He noted:

Disney’s Riviera Resort is currently being evacuated. Alarms are going off and guests are safely (and calmly) exiting the resort. A firetruck is also at the resort.

Disney's Riviera Resort is currently being evacuated. Alarms are going off and guests are safely (and calmly) exiting the resort. A firetruck is also at the resort. pic.twitter.com/yESn5FgBx2

At this time, Walt Disney World Resort officials have not shared details about what happened at the Deluxe Resort last night. Those who shared these updates to social media indicated that the evacuation took place safely. The team at Inside the Magic will continue to provide updates regarding the evacuation as they become available.

Disney’s Riviera Resort is Walt Disney World’s newest Disney Vacation Club property. It opened on December 16, 2019 and is described as:

Disney’s Riviera Resort is designed to capture the magic of Europe that Walt Disney fell in love with once upon a time.

Upon arrival, you’ll be welcomed home by a palm tree-lined boulevard and the striking façade of this Resort hotel. From the grand archways and porticos to the tower and terraces, Disney’s Riviera Resort is a modern masterpiece of imagination, with each detail drawing upon the influences of Europe and the Mediterranean.

Elegance awaits you inside. The main lobby is appointed with a mix of modern and classic 20th-Century furnishings. You’ll also discover a unique art collection celebrating beloved Disney Characters and icons, influenced by master artists who found inspiration along the European Riviera.

The ambiance extends outdoors—where beautiful gardens, bubbling fountains, lush landscaping and a serene waterfront beckon you to enjoy scenic strolls with your loved ones.

Have you stayed at Disney’s Riviera Resort?