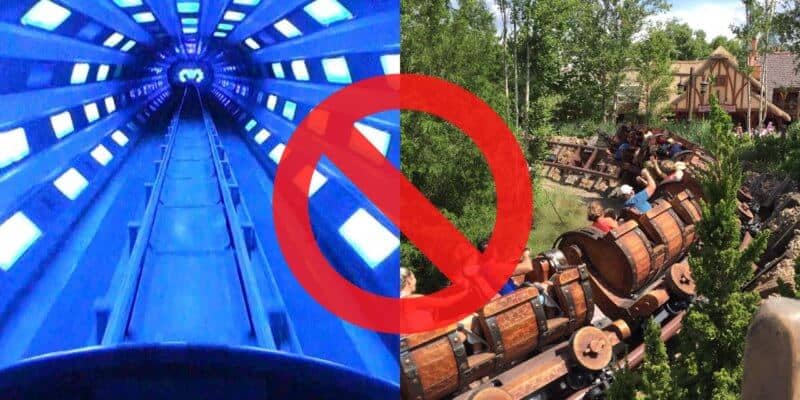 If there is a company that has taken health and safety measures seriously this pandemic, it is most definitely Disney. Having spent a large portion of the pandemic in Florida, I can easily say there is not another place I felt safer than Walt Disney World. One main reason of this is because Disney’s mask policy is like no other.

Carousel of Progress is seemingly an easy attraction to not only stop but catch Guests who are not complying with Disney World’s health and safety rules since it is an attraction that is either moving at a snail’s pace or not at all. Now, it seems we have confirmation Disney World will not only stop a slow-moving theatre attraction when a Guest removes their face covering, but Disney will also stop a roller coaster.

BlackbeardMatt (@BlackbeardMatt) was at Magic Kingdom yesterday and experienced the same attraction stopping scenario when someone was caught after removing their mask.

Was riding a rollercoaster at Disney’s Magic Kingdom today and it stopped dead mid ride. Someone had taken their mask off on the ride so they shut the ride down. Disney be serious. #WearAMask

Was riding a rollercoaster at Disney’s Magic Kingdom today and it stopped dead mid ride.

Someone had taken their mask off on the ride so they shut the ride down.

Although BlackbeardMatt did not mention the coaster at Magic Kingdom where this happened, it seems that Disney has no issue stopping a fast-moving attraction in order to ensure Guests are keeping their masks on.

When you said stop dead, I envisioned the ride just coming to a complete stop after 60mph. There were no survivors but at least you had your masks on!

To which BlackbeardMatt responded with “Definitely seemed like it”.

When you said stop dead, I envisioned the ride just coming to a complete stop after 60mph. There were no survivors but at least you had your masks on!

Considering the stop was described as abrupt, it seems that the coaster in question was likely one of the more intense options at Magic Kingdom. Personally, if I were to guess, I would think that the coaster was either Space Mountain or Seven Dwarfs Mine Train, solely because there are more cameras that surround these two attractions, allowing Cast Members to catch Guests who are trying to be sneaky. However, at this time it has not yet been confirmed which coaster was stopped due to the mask removal.

That being said, we now know that Disney World will seemingly stop basically any attraction to make sure Guests are complying with the safety standards. Please remember that if you choose to visit Disney World during the pandemic, proper and approved face coverings must be worn at all times over your mouth and nose. Failure to comply could have you removed from the park, or in the case of doing it on an attraction, highly embarrassed as well as knowingly being the one to ruin everyone else’s experience around you.

If you need a refresher on how to properly wear a mask while on Disney World property, the rules are as follows:

At this time, based on guidance from health authorities, neck gaiters, open-chin triangle bandanas, and face coverings containing valves, mesh material or holes of any kind are not acceptable face coverings.

After talking with BlackbeardMatt on Twitter, we discovered it was indeed Seven Dwarfs Mine Train that was stopped.

Seven Dwarfs Mine Train in Magic Kingdom. Right at the top after going through the mine they stopped it for about 30 seconds.

Seven Dwarfs Mine Train in Magic Kingdom. Right at the top after going through the mine they stopped it for about 30 seconds.

Have you had an attraction stop while you were riding due to a Guest removing their face mask?