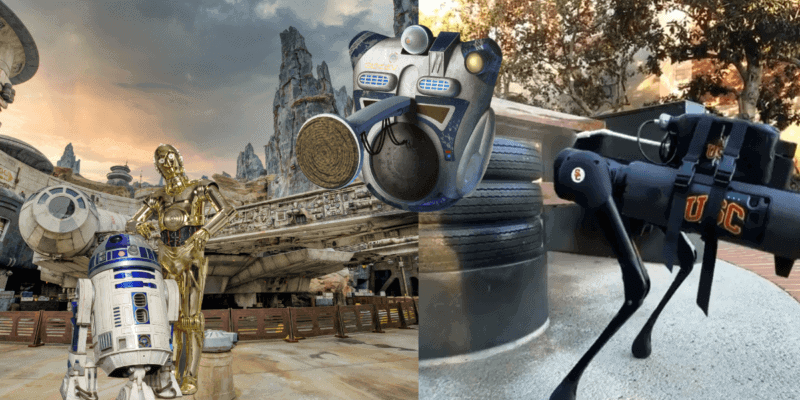 Picture this: you’re roaming around Star Wars: Galaxy’s Edge in Disneyland and, after piloting the Millennium Falcon, you stop for a bite to eat at Ronto Roasters, only to see an SP-80 cleaner droid making sure your table is perfectly sanitized before you sat down.

Or perhaps you are meandering Tomorrowland in Magic Kingdom. You grab a drink at Joffrey’s Coffee and sit down on a bench that was just perfectly cleaned by a robot.

Could Disney really develop sanitation droids? Well, it looks like one university is already doing it.

Disinfection Robot at the University of Southern California

The University of Southern California is currently building robots that can sanitize surfaces and, hopefully, help stop the spread of COVID-19. The Los Angeles-based university’s Viterbi School of Engineering is developing a robot to fight the virus through disinfection. Take a look:

The robot can disinfect surfaces accurately and effectively — something that is definitely needed during the ongoing COVID-19 pandemic. The robot — named LASER-D —  looks highly impressive and advanced, as though it’s from a galaxy far, far away. And, if you’re a Star Wars and Disney Parks fan like we are, you are probably wondering when Disney will do the same thing.

Below is the full video of LASER-D, the disinfection robot:

Here’s how the USC Viterbi School of Engineering describes the robot:

We have developed semi-autonomous quadruped robot, called LASER-D (Legged-Agile-Smart-Efficient Robot for Disinfection) for performing disinfection in cluttered environments. The robot is equipped with a spray-based disinfection system and leverages the body motion to controlling the spray action without the need for an extra stabilization mechanism. The system includes an image processing capability to verify disinfected regions with high accuracy. This system allows the robot to successfully carry out effective disinfection tasks while safely traversing through cluttered environments, climb stairs/slopes, and navigate on slippery surfaces. We have also developed simulation software to enable users to design and evaluate disinfection plans.

Though it’s still in development, this robot is surely attention-grabbing, especially during this ongoing pandemic. And since it’s purpose is disinfection, it can certainly be helpful even beyond the COVID-19 era. Of course, it’s being developed at a university where thousands of students study. But at a theme park that millions of people visit every year, a robot like this could be of particular use.

Cleanliness has been a priority at Disney Parks ever since Walt Disney opened Disneyland in 1955. But especially in this pandemic, it’s clear that sanitation is of the utmost importance in order to protect all Guests and Cast Members.

Disney has been praised for pandemic-era protocol over the past several months. The company has been commended by prominent officials, legislators, and even Guests for the way they have operated their theme parks, even as COVID-19 cases continue to rise throughout the U.S.

But still, Disney continues to adapt its practices to fit not only the times we are living in but also the needs of Guests and Cast Members, and even the recommendations from health officials and the Centers for Disease Control. So, could sanitation droids be in the parks’ future?

Are Disinfecting Robots Worth the Price?

Imagine how cool it would be to see a cleaning droid model around Star Wars: Galaxy’s Edge at Disneyland Park in California and Disney’s Hollywood Studios in Florida. And we could totally picture a robot cleaning surfaces in the futuristic Tomorrowland at Magic Kingdom and Disneyland. Roaming droids and robots are certainly on-theme for the Disney Parks. But are they worth it?

Let’s talk about the bantha in the room: the money.

It’s no secret that developing technology like this will take a lot of money. Companies around the world continue to face economic hardships as a result of the ongoing pandemic, and Disney is no exception to this. The Walt Disney Company has laid off tens of thousands of employees this year and furloughed even more. The company has had to cancel events, postpone projects, and drastically adjust operations. And, given this, is investing in sanitation droids a good move right now?

Related: You May See This Familiar Droid Roaming Around Galaxy’s Edge

It’s unlikely that right now Disney would want to invest money into bringing sanitizing droids to Galaxy’s Edge, disinfecting robots to Tomorrowland, and AI that can keep all areas of the parks clean. After all, wouldn’t it make sense to bring back more Cast Members to do just that? However, knowing that this technology is continuing to be developed, it would surely be a great option for the future.

So if you head to a Disney theme park during this pandemic, you’re not going to see a BB unit cleaning the bathroom (or more like a Ran-D housekeeper droid hanging out in Oga’s Cantina). But maybe that possibility isn’t so far, far away.