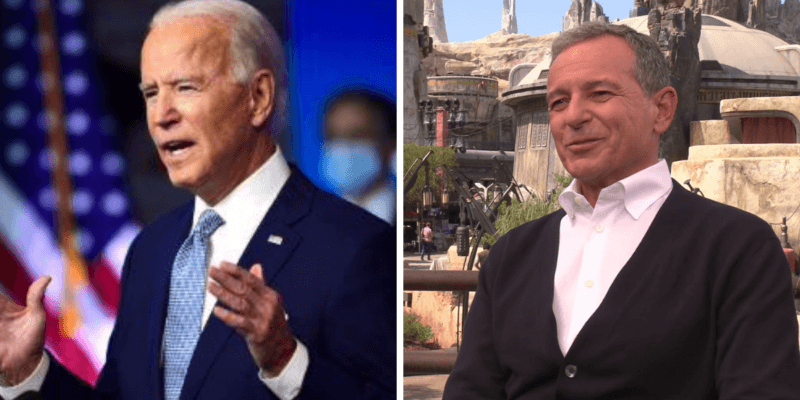 Disney’s Executive Chairman Bob Iger might be leaving the Mouse House for politics after all.

According to The Hollywood Reporter, Iger is at the top of President-elect Joe Biden’s “wish list” for an ambassador position, and sources say it is likely to be either the Ambassador to the United Kingdom or China, though it is not yet confirmed.

“You’ve traditionally seen those who raise bundles get ambassadorships. And everyone wants to go to the Court of St. James,” said Reed Galen, co-founder of The Lincoln Project, in a reference to the U.K. post being the most coveted. Public records show Iger donated $250,000 to the Biden presidential campaign. THR also reports that Dreamworks founder and former Chairman of Walt Disney Studios Jeffrey Katzenberg, as well as  Matt Walden, husband of Walt Disney Television chairman Dana Walden, are being considered for similar positions.

While the UK ambassadorship may seem to be the more favorable post in the eyes of the backers, Iger’s track record may prove him to be a good fit as an Ambassador to China, given The Walt Disney Company’s relationship with the country.

During his tenure as CEO, Iger was able to establish a cooperative business relationship with Xi Jinping and China’s current communist regime that culminated in the opening of the Shanghai Disney Resort. It was a move that made The Walt Disney Company the first American corporation to build and operate a theme park and resort in Mainland China.

Through the continued development and operation of Shanghai Disney Resort, as well as through other collaboration projects like Walt Disney Studio’s latest live-action remake, Mulan (2020), Iger has been able to maintain a seemingly well-respected, business-friendly relationship with the Chinese government. One may say it makes sense that a new President of the United States would look for someone who has a preexisting relationship with a nation’s leaders to be the new ambassador for that nation.

Iger has repeatedly stressed in his book, The Ride of a Lifetime: Lessons Learned from 15 Years as CEO of the Walt Disney Company, and in The Imagineering Story how he sees the Chinese market as crucial to the future of The Walt Disney Company. But, that desire to continue to push into this new frontier, and connect your culture with another to where it benefits both parties, extends outside of the corporate world. This is known to be an essential diplomatic quality of any successful ambassador between any two countries.

We at Inside the Magic have covered that Bob Iger at one point seriously considered running for the presidency, although he eventually decided against it.

“I’m not sure I would have gotten as far as actually running,” he said, “because, as the realist in me was sinking in, I was starting to think more and more about how difficult the path might be in the Democratic party for a businessman to actually get the nomination.”

It was during this time that Iger also mentioned that he would be open to taking on another government position if the opportunity presented itself.

In April 2020, Iger was appointed to Governor Gavin Newsom’s Business Recovery Task Force. But, he stepped down after rising tensions due to Newsom’s refusal to reopen businesses, specifically the Disneyland Resort and other theme parks.

Only time will tell at this point if Bob Iger will take on any government position in 2021. But one thing is clear: if he is being seriously considered for the ambassadorship to China, one only needs to look at The Walt Disney Company’s work to create Shanghai Disneyland as proof that Iger has at least some qualifications for the job.

What do you think about Bob Iger possibly becoming an ambassador? Do you think he’d be a good one? Let us know in the comments!