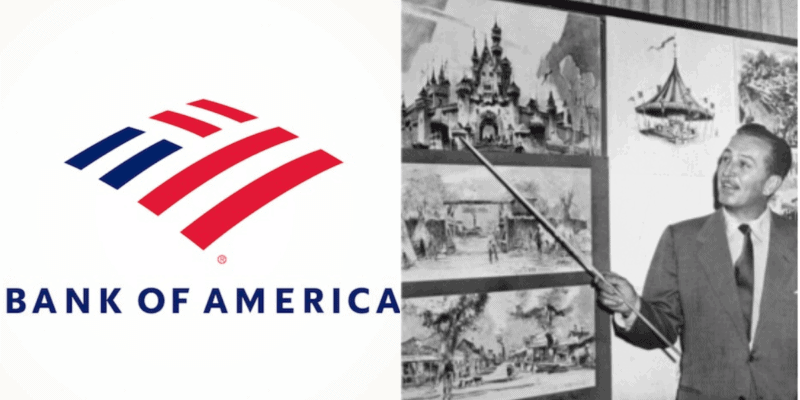 A subtle, but very historic, piece of Disney history might have just been auctioned off today.

According to Heritage Auctions, a framed promissory note signed by Walt Disney to Bank of America was sold for $4,000. The framed display included a picture of Walt Disney as well as correspondence between Walt’s secretary and the branch manager. The note for $25,000 was marked PAID in January of 1955:

Matted and framed to an overall 24 ½” x 27 ¼”, this lot contains four items. The eyes go straight to the upper left where a promissory note signed by Walt Disney is displayed. The $25,000 note was made out to Bank of America on October 7, 1954, and signed by Disney in the bottom right corner. The typed letter in the upper right corner is on Bank of America stationary from 1955, signed by Thomas C. Deane (vice president and manager), denoting the note had been “PAID.” The letter in the bottom left corner is a typed letter from Disney’s secretary, but not signed. And in the bottom right corner is a color photo of Disney. Overall, in Very Good Plus condition.

Many of you probably know that 1955 was a pretty special year in the history of The Walt Disney Company. It was the year that Disneyland opened. And, Bank of America provided backing for the construction.

On its website, Bank of America tells Disney history from its perspective, saying:

Walt Disney’s vision of an amusement park for children that would embody the magic and imagination of his cartoons and films was initially met with discouragement. Among the skeptics in his company was his brother, Roy, who thought that a “fanciful, expensive amusement park would lead to financial ruin.” But Walt was confident of his vision, and so was Bank of America. The construction of Disneyland began in Anaheim, California in the early 1950s.

Construction of Disneyland began on July 16, 1954. Crews worked around the clock to meet the demanding deadline for completion of the park. Walt visited the site several times a week to check on the progress. As weeks and months passed, the materialization of tropical jungles, a rustic frontier fort, Tomorrowland, Main Street USA and a charming, ornate castle took shape among what was once 160 acres of orange groves.

After one full year of construction and a total investment of $17 million, the gates of Disneyland opened for guests on Sunday, July 17, 1955. Inside the park, located on Main Street stood a fully functioning Bank of America branch. Bank associates dressed in turn-of-the-century clothing and even offered money orders printed only for the Disneyland branch.

Could this payment made by Walt Disney have anything to do with Disneyland Construction?

Honestly, probably not. But, Walt had a longstanding relationship with Bank of America way before Disneyland. Bank of America financed Snow White and the Seven Dwarfs and it was that success that gave the bank confidence to then invest in his other films, including Bambi, Cinderella, Dumbo, Fantasia, Peter Pan, Pinocchio, and The Three Caballeros. And while the dates of the correspondence letters appear to be from separate transactions, they too reflect that ongoing business between bank and studio.

Related: Captain America’s Shield, Other Marvel Props Up for Auction

Walt Disney released Peter Pan in 1953. So if there were any loan payments that were still due at the time, there is a stronger possibility this check for $25,000 was in return for the backing for that film.

It should be noted that there is absolutely zero confirmation of anything at this point and we are purely speculating about this brief second in Bank of America’s ongoing relationship with the Walt Disney Company.

But one has to wonder: Would there have ever been Snow White, Cinderella, Peter Pan, or even Disneyland if the folks at Bank of America didn’t believe in Disney Magic first?