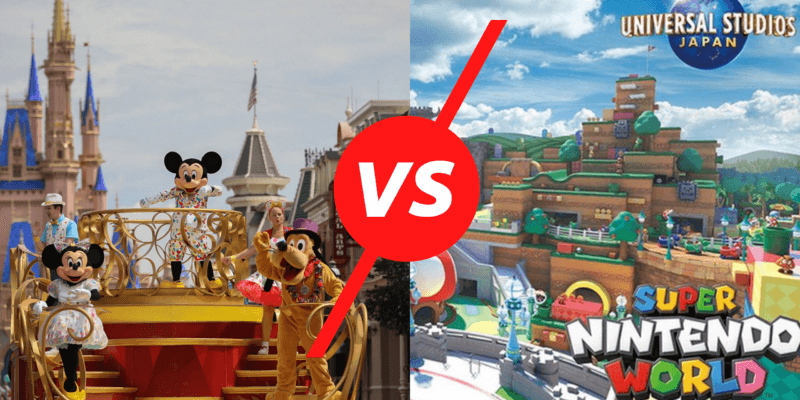 2020 has been a very tough year for many businesses, especially the theme park industry. And when it comes to Universal and Disney in terms of theme parks, there is always some healthy competition going on which is super great for guests considering both companies are constantly stepping up their game and reinventing their parks. But who is going to shine in 2021?

Because of the financial losses, both companies faced in 2020, doing well in 2021 is going to be critical for both companies. With Disney World celebrating its 50th anniversary in 2021, many theme park fans have likely assumed this will be the theme park to visit, but after Universal Studios Japan released a 2021 opening date for Nintendo World, this could put a wrench in Disney’s Guest attendance.

Would people go to Japan over Orlando?

Depending on where you live, geographically, a Japan trip could cost many a lot more than an Orlando trip, and in most cases, I would assume that Orlando, being the vacation and tourist destination that it is, would dominate in terms of these 2 choices. But, we need to remember that for a year, many people have not been able to travel due to the pandemic. Because of that, I would not be surprised if guests chose to visit Universal Studios Japan and discover Nintendo World for the first time, and explore a country they have never been to, rather than go back to Orlando (as many Disney World Guests are return ones).

Although this theory wouldn’t bode well for the 50th anniversary of Disney World, it would be highly unlikely for someone to head to Japan to visit Universal Studios and not go to Tokyo Disneyland or Disney Sea. Therefore, even if people do choose to create a more elaborate trip, there is a chance Disney would still be a major player in one’s vacation planning.

Who will have better offerings?

That being said, Universal Studios Japan is releasing an entire land. With Universal’s track record, Nintendo World is likely going to blow us all away, and from the photos we have seen I do not think Universal will disappoint. If we look back to the first time we saw the Wizarding World of Harry Potter come to life, the immersion and details created there were unmatched. In my opinion, Disney had not yet been able to create a land that sucked you in as deep as the Wizarding World of Harry Potter, which was fantastic because then they knew that Star Wars: Galaxy’s Edge had to be out of this world (pun intended).

With a vaccine on the way, 2021 travel will hopefully ramp up again and memories and laughs can fill both Universal and Disney parks once more. Until then, stay tuned to Inside the Magic for all the latest theme park details!

If you want to book a trip out to either see Nintendo World at Universal Studios Japan or attend the 50th anniversary at Disney World, click here to begin planning today!

Would you rather go to Universal Studios Japan or Disney World in 2021?

Comments Off on Will Universal Outshine Disney’s 50th Anniversary?