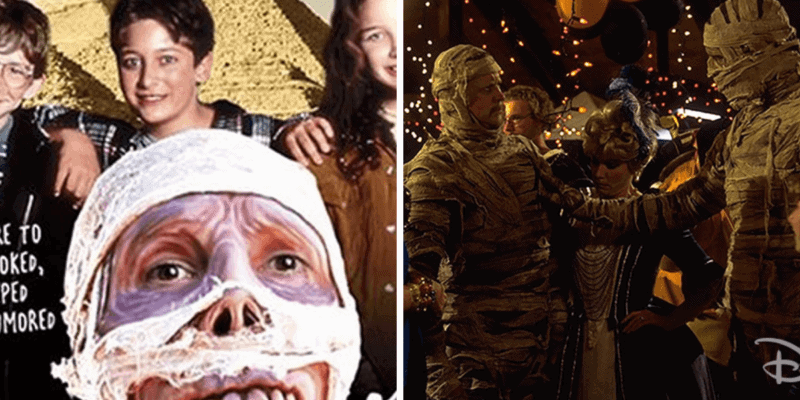 Ah, the 90’s what an amazing time to be hooked on the Disney Channel. If you are a 90’s kid you probably remember how exciting it was to watch a new DCOM or Disney Channel Original Movie. We have good news for those of you who have fond memories of Under Wraps!

Under Wraps is getting a remake that will land on the Disney Channel in 2021! Surprisingly not going straight to Disney+, BUT because Under Wraps was the first-ever Disney Channel Original Movie perhaps they wanted to pay homage to the movie that started it all.

The re-imagined story takes place a few days before Halloween when 12-year-old friends Gilbert (Simon), Marshall (Barton) and Amy (Hammons) accidentally revive a mummy they discover in a neighbor’s basement, which they affectionately name Harold (Wright). However, they must rush to return him to his resting place before midnight on Halloween. Along the way, the team narrowly escapes a nefarious group of criminals intent on selling the mummy to the highest bidder. When Harold is inevitably captured, Marshall, Gilbert and Amy must band together to stand up to the criminals, face their fears and rescue their new—but rather “ancient”—friend.

No official release date as of yet, but we assume it will be sometimes around Halloween of next year. We are looking forward to seeing this nostalgic movie come back to life!

But one question, how many fans have Disney Channel anymore? Hopefully for those of us who have cut our cable cords Under Wraps will make the transition from Disney Channel to Disney+ quickly!

Are you excited to see an Under Wraps remake? Let us know in the comments!

Subscribe to our newsletter below to keep up to date on all the latest Disney news!