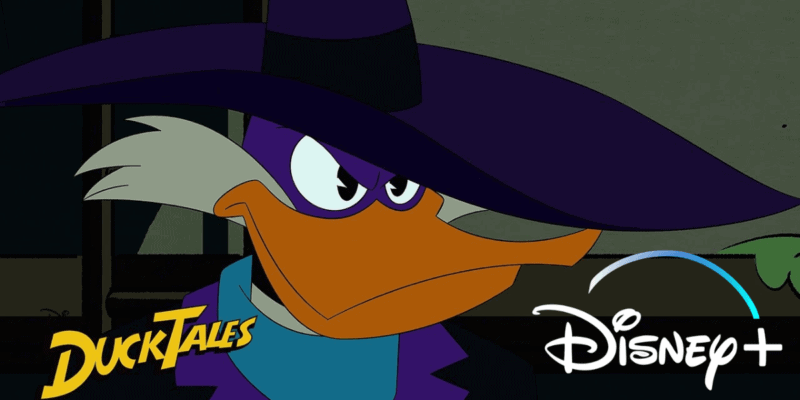 After running a pilot episode in the latest season of DuckTales, it appears that the rebooted Disney Afternoon cartoon universe will expand with Darkwing Duck. But unlike DuckTales, Darkwing Duck will make its debut on Disney+ rather than Disney Channel.

Reports of a Darkwing Duck reboot in early stages of development come from Variety:

No writer is currently attached to the project, but sources say it will be executive produced by Seth Rogen, Evan Goldberg, James Weaver, and Alex McAtee of Point Grey Pictures. McAtee will oversee the project for the company…Should the project go to series, it would be the latest Disney Plus take on a well-known property.

We at Inside the Magic reported that the creators of the DuckTales reboot saw that now was the time to not only relaunch Darkwing Duck, but also recreate the Disney Afternoon Cartoon Universe all over again with Season 3 already reintroducing Goofy and Max (Goof Troop), and Chip and Dale (Chip n’ Dale Rescue Rangers). But no official plans were announced yet.

Variety also mentioned that representatives from Point Grey did not immediately reply to requests for comment and Disney declined to comment on the matter. So as much as some may be waiting for this reboot to happen (this writer included) we suggest that we take this information with a grain of salt until the official word comes from Disney.

If true, however, it would be a noticeable step in Disney’s transition from linear formats like the Disney Channel to direct-to-consumer streaming like Disney+ as a treasured Disney Channel show like Darkwing Duck finds new life on another platform.

We at Inside the Magic will stay on this story and will update our readers as more information comes to light.

Do you want to see the “Disney Afternoon” cartoon universe be revived on Disney+? Why or why not? Let us know in the comments!

Comments Off on ‘Darkwing Duck’ Reboot Reported for Disney+, Not Disney Channel