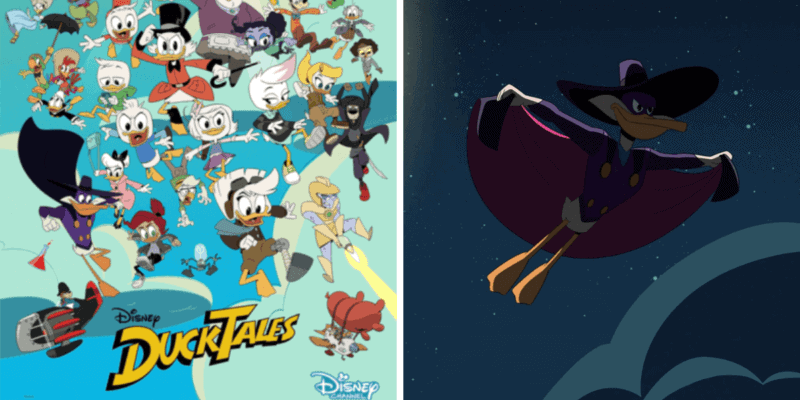 Oo-oo-oo! Looks like the people behind Disney Channel’s DuckTales reboot are ready to launch a reboot of the good old multi-show universe found on Disney Afternoons. It appears they are looking to start with Darkwing Duck.

“Darkwing is the [character] we’ve been building up to the most,” says co-creator Matt Youngberg. “We’ve been really working on his storyline in the background for two seasons. It felt appropriate for him to be the big centerpiece for the season in terms of the Disney Afternoon additions.”

But it’s going to be different this time. Darkwing Duck was reintroduced as a show that Launchpad watched as a kid, and now his shared admiration for the vigilante with actor Drake Mallard will find them both in the same roles once again.

“Darkwing Duck had a huge influence on Launchpad’s life, and the way that made sense for us to be able to do that and still have him team up with Darkwing Duck was by introducing it as this notion of a TV show. The fact that Darkwing started as an actor makes all the sense in the world for his character. So that just gave us a lot more to play with.

“One of the things that we always do on DuckTales is to try and find a three-dimensional character-based reason for why these iconic characters act the way they do. So there was something really interesting in giving the backstory of being an actor and a huge fan of the original Darkwing Duck and [having Drake] team up with Launchpad, [as a way] to honor that.”

The first test of this will be a special episode of the latest season of DuckTales centered completely around Darkwing Duck with cameos from other Disney Afternoon characters like Goofy and Max, and Chip and Dale.

“So much of the show has been about expanding the world of DuckTales, not just cameos but also the world of the McDuck family,” says Angones of why the show’s third season is the right time to center an episode around Darkwing Duck. “So it felt like the right time to see how Launchpad’s world is going to grow a little bit and to bring in these characters.”

“The [special] is hitting into this midpoint of the season where we wanted to make sure that a lot of the narrative threads that we’ve been weaving through the season are coming together,” says Angones. “There are huge events that have massive ramifications for the rest of the season with regards to Scrooge and his family story, so it would feel weird not to have them be a part of that.”

One of those connections will be introducing Darkwing’s first villain as an employee of Scrooge, Taurus Bulba.

“The notion of having a character like Taurus Bulba be an employee of Scrooge was interesting to us, and played into some of the larger themes that we’re talking about this season,” says Angones. “It’s really interesting to be able to set up a situation where the villains are using Scrooge’s own methods, the things that he thinks are fantastic, against him.”

But exactly why they have decided to start the new universe now is still unclear.

“Narratively we can’t say exactly why [just] yet, but there is a reason that all of these Disney Afternoon cameos are happening within the narrative of Season 3, and why all of a sudden these characters are starting to pop up … We really wanted to show how it did lead to a larger world, both in a literal sense and in a meta sense.”

“The thing that we feel about all of our DuckTales characters is that they have unlimited story potential,” says Angones. “If the opportunity arose, that would be really interesting and fantastic. We certainly have stories, not just about Darkwing, but about the rest of our families and all the various offshoots. Our goal was to really build the Disney Afternooniverse, a world that we could play in, that other people can play in.”

You can watch the full special Darkwing Duck episode, “Let’s Get Dangerous” on Disney XD’s official YouTube Channel by clicking below:

Are you excited for more to come from Disney’s DuckTales reboot? Let us know in the comments!