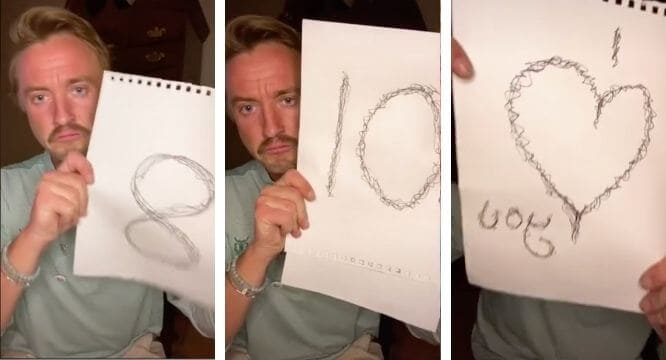 In 2020, the short video platform TikTok exploded! With over 500 million accounts, the TikTok app has attracted people all over the world to its platform — and celebrities where not immune to the viral new app.

For example, Tom Felton, who played Draco Malfoy, the Harry Potter villain everyone loved to hate, is active on the platform and boasts over 6.1 million followers.

Well, okay, he’s already famous — so, what is the big hype behind Tom Felton’s account on TikTok? Well, he has created a challenge that has Harry Potter fans freaking out!

One of Draco Malfoy’s iconic characteristics in the famous wizarding movie franchise is the way he pronounces Harry’s last name “Potter” so it sounds more like “Pottah.”

Tom Felton has asked his followers and fans to go on TikTok and say “Pottah” like Draco Malfoy would — and fans have gone mad with this challenge!

Give me your best shot, muggles! Use the hashtags #pottahchallenge and #dracotok for a chance to duet

If you are interested in being part of the ‘Pottah’ challenge, all you need to do is make a TikTok video pronouncing your best ‘Pottah’ version and tag @t22felton and use the hashtags #pottahchallenge and #dracotok. If you are lucky enough, Tom Felton will duet your TikTok and give you a score!

As if things weren’t already fun and interesting enough, Felton took the challenge to the next level and asked Draco’s father Lucius Malfoy (Jason Issacs) to participate in the “Pottah” challenge. And Issacs said yes! But, like in some spells, not everything goes as planned and as Tom said in his TikTok video, ” I am not sure if he misheard the exact concept.”

Felton said that because Issacs started posting videos on TikTok saying “Pottah” in different places, as if he is actually looking for Harry Potter?! He even looks inside trashcans, inside his fridge, and inside the toilet!

One comment on Felton and Isaac’s TikTok video was so on-point that Tom Felton replied to it.

What do you think of Felton’s ‘Pottah’ TikTok challenge? Have you tried doing the challenge? Let us know in the comments below.

Comments Off on Tom Felton Issues ‘Pottah’ Challenge On TikTok