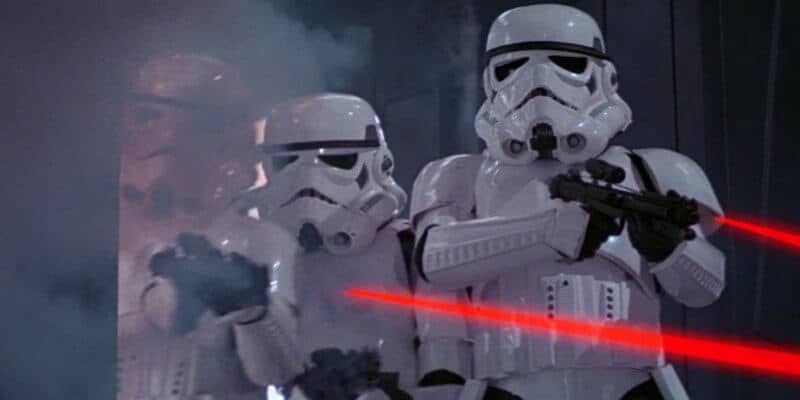 Who says all stormtroopers are on the dark side? One off-duty Nevada police officer potentially saved lives as she stopped a drunk driver from a potential crash on Halloween night.

Trooper Britta Foesch, who was not only off-duty but also a designated driver dressed as a Star Wars stormtrooper, stopped a vehicle, who was suspected of driving under the influence, on Halloween night from potentially crashing.

According to the Nevada Highway Patrol, this off-duty trooper stopped a driver, who was on the wrong side of the road, from entering a high-traffic highway in Las Vegas (I-15) while dressed in her Halloween costume: a Star Wars stormtrooper.

The suspected drunk driver was arrested on suspicion of driving under the influence, who was also driving without a valid driver’s license on top of having two traffic violations.

NHP took to Twitter to post the dashcam footage along with a fun Star Wars tribute video, which begins with the same intro as all of the Star Wars films. It reads:

On a highway not so far away — Star Words — Episode I: OFF DUTY STATE TROOPER STOPS WRONG WAY DRIVER

Early in the morning on October 31st, Trooper Britta Foesch was off duty and on her way home from a Halloween party. She saw a vehicle trying to enter the I-15 going in the wrong direction. She stopped the vehicle, called dispatch, over the phone and got on duty Troopers to respond. The driver was arrested on suspicion of DUI. Ironically Trooper Foesch still had her costume on, she was dressed as a Storm Trooper.

Trooper Foesch no doubt intervened and stopped a potentially deadly situation. The FORCE is strong in Trooper Foesch.

You can check out the NHP dashcam footage here:

This morning a off duty Trooper stopped a wrong way driver from entering the I-15. All this happened while the Trooper was dressed as a Storm Trooper after a Halloween party. Driver was arrested on suspicion of DUI, all this was captured on the Troopers personal dash cam. #nhp? pic.twitter.com/blcwkBE9qB

Thank you to Trooper Foesch for intervening and stopping a potentially deadly situation.

Comments Off on Stormtrooper Stops Drunk Driver on Halloween Night