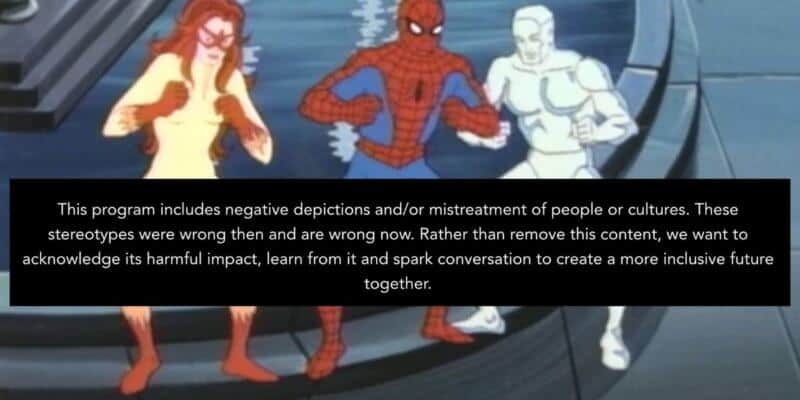 When Disney+ first launched last year, the company took precaution as they placed a warning in the description of films for subscribers to read regarding some of the controversial or outdated scenes before watching some of Disney’s older, classic content. For reference, some of the scenes that were in question were those from older Disney Animated Classics such as Disney’s Dumbo and Lady and the Tramp.

After the initial warnings were displayed in the description of the film, Disney+ decided to update its warnings to reflect the acknowledgment of negative depictions and/or mistreatment of people or culture. The new warning, which is shown before certain films, reads:

We are now noticing this has been added to another series on Disney+ — Spider-Man and His Amazing Friends. On one specific episode titled “Sunfire,” this new warning shows for approximately 12 seconds prior to the start of the show.

Though this episode of Spider-Man and His Amazing Friends gets the warning, fans have also noticed that one episode titled “The Quest of the Red Skull” has been left off of Disney+ entirely, most likely because it depicts Adolf Hitler, the Nazi swastika, and the use of the phrase “Heil Hitler.”

In case you missed it, some of the other scenes that have been targeted for negative depictions include the one scene in Disney’s Dumbo where the black crows sing “When I see an Elephant Fly,” many fans and audiences acknowledge that the scene can be viewed as negative representation of African Americans. The same goes for a scene from Disney’s Lady and the Tramp. The Siamese Cats sing the song “The Siamese Cat Song,” which many agree is very catchy, but as you listen closely to the lyrics, it makes sense as to why there has been controversy.

The new warning has also been shown prior to films including Peter Pan, The Aristocats, The Jungle Book, and Swiss Family Robinson.

What do you think of the new warning shown before certain films and shows? Let us know in the comments below.