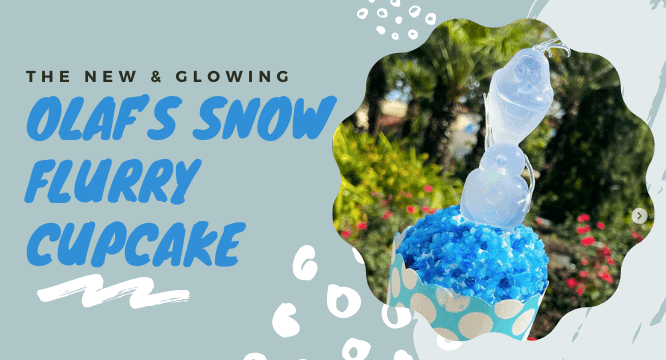 Some people are worth melting for! Grab those close to you and head to Walt Disney World for the wealth of tasty treats covering the resort this holiday season. A new Disney’s Frozen Olaf cupcake graces Disney’s Hollywood Studios, nestled into Rosie’s All American Cafe.

Last fall and early winter, we were gifted by the spirits Frozen holiday treats celebrating the release of Frozen 2 and the merchandise collection featuring the signature color Arendelle Aqua. The Water Nokk cupcake was beautifully frosted, while the Olaf chocolate treat was extremely unique and elegantly presented. This year’s Olaf cupcake is adorable, reminiscent of the snow and ice that is at his core.

The holiday treat is called Olaf’s Snow Flurry and is made of a central yellow cupcake mix. Topped with vanilla buttercream icing, a snow flurry sugar sprinkle topping, with an Olaf Glow Clip perched on top. You can clean off the Olaf cupcake topper and attach him to your bag, cup, or accessory of your choice. He glows and is a great way to stand out!

Inside the cupcake, we see a basic yellow cake and a vanilla buttercream, piled high! Unlike cupcakes that have debuted this season, there is no tasty core of caramel, frosting, or otherwise. Instead, we have a classic, plain Frozen cupcake that will appeal to even the pickiest of eaters in your family.

Snag this tasty Frozen dessert for $7.99 at Rosie’s All American Cafe on Sunset Blvd. in Disney’s Hollywood Studios. An Instagram user with lovely photos under the handle, @PixieDustedFun, shared a descriptive caption under their series of photos about the new Frozen-inspired cupcake:

“New! Olaf’s Snow Flurry Cupcake. ❄️?⛄️❄️
One of the cutest cupcakes! This cupcake is topped with a light up Olaf. ❄️⛄️
A yellow cupcake with vanilla buttercream and snow fairy sugar. ❄️?⛄️❄️
Located at Rosie’s All American Cafe in Hollywood Studios.”

Be sure to browse the carousel of photos here, which includes a lovely video twirl of the cupcake so you can see all sides of the treat!

Will you be snacking on this Olaf cupcake this holiday season? Some things never change, like our love for the sweet stuff. Leave us a comment below about your sweet tooth!