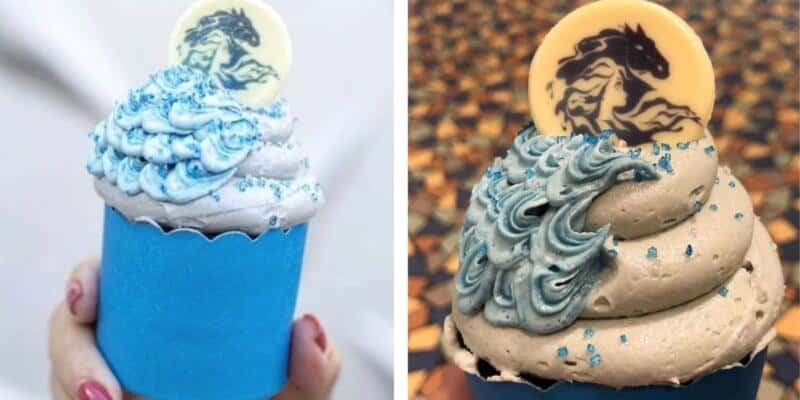 Frozen 2 is hitting theatres on November 22 and Walt Disney World is celebrating with brand new sweet treats all throughout the theme parks.

The latest Frozen 2 themed treat is a delicious cupcake, which can currently be found at Disney’s Pop Century Resort. The Frozen Waves Cupcake features buttercream which is iced to resemble beautiful waves, hence the name Frozen Waves. It is topped with sugar crystals, edible glitter, and a white chocolate piece of Elsa and the Nokk.

The cupcake itself is a chocolate cake, with a glob of chocolate ganache right in the center. It is then is topped with a vanilla mint buttercream. (An interesting combination to say the least). Beautiful shades of blue buttercream and piped onto the top of the cupcake, which closely resemble crashing waves.

The Frozen Waves Cupcake costs $5.99 and can be found at Disney’s Pop Century.

This is by far the only Frozen 2 themed treat that has been spotted on Walt Disney World property.

The Hidden Truth Cupcake has also made its debut at Disney, which looks very similar to the Frozen Waves Cupcake. Though, appearance is almost identical, the tastes and textures of the two cupcakes are very different.

The Hidden Truth Cupcake features a moist vanilla cake which is then filled with blackberry and chocolate ganache. The cupcake is topped with a blackberry buttercream frosting, which is colored blue and then sprinkled with white and blue sprinkles, edible glitter, and that same white chocolate piece, featuring Queen Elsa and the Nokk.

This Frozen cupcake has been available since October 28th at both Good’s Food To Go at Disney’s Old Key West Resort and at The Artist’s Palette in Disney’s Saratoga Springs Resort & Spa.

Do you want to try the new Frozen Waves Cupcake at Disney World? Let us know in the comments.