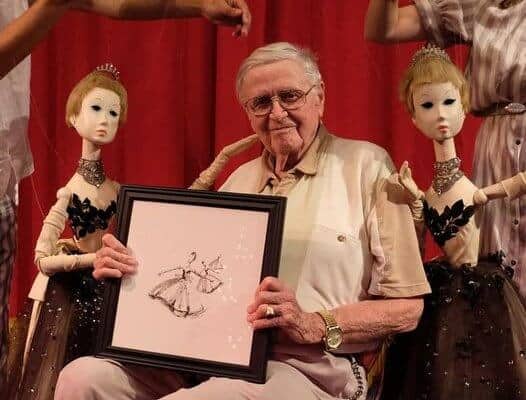 John Leland might not be a household name to all, but we can assure if you are a Disney fan then you have definitely seen his works. Unfortunately, it is with heavy hearts that we share his recent passing.

Leland was a designer for the Disneyland Resort. Specifically, he worked on Main Street, U.S.A.

John Leland was a long time visual artist who worked alongside master puppeteer Bob Baker to develop some popular window displays on Main Street. Leland and Baker collaborated to design amazing displays for the Emporium at both Disneyland and Magic Kingdom at Walt Disney World.

Leland helped create the scenery for the Bedknobs and Broomsticks display, as well as the 101 Dalmatians display. He also collaborated with Bob Baker to develop a line of Disney-licensed marionettes and would later help found the Bob Baker Marionette Theater in Los Angeles. The theater recently just hosted a tribute to Leland last year.

John went on to work with other talented designers and puppeteers like himself. He worked on design projects for cruises, television, and commercials.

Leland was a California native born in Pasadena. He went on to study motion picture illustration and landscape painting at the Otis Art Institute in Los Angeles. He spent most of his free time doing what he loved, designing puppets.

Bob Baker Marionette Theater is saddened to share the news of the passing of John Leland– a beloved illustrator, designer, scenic painter, fabricator, and founding member of our Theater. Some of the work John contributed to Bob Baker Marionette Theater, includes but is not limited to puppet design and painting for productions such as “Sketchbook Revue” and “Holiday Spectacular,” and scenery design and painting for productions such as “Something to Crow About” and “The Nutcracker,” Animation Window Displays for Disneyland and Disneyworld, and so much more. During his career, John also worked with many prominent puppeteers and designers including Jody Baron Productions, Richard Jones, Hazel Newsom, John Zweers and Jim Gamble. He could often be found hanging out in the office of our original location at 1345 W. 1st Street enjoying a meal from Tommy’s and telling one-liners to anyone that happened to be in the same room.

Bob Baker Marionette Theater is saddened to share the news of the passing of John Leland– a beloved illustrator,…

We here at ITM would like to express our condolences and remember the talented John Leland.

Comments Off on Disneyland Designer John Leland Passes at Age 91