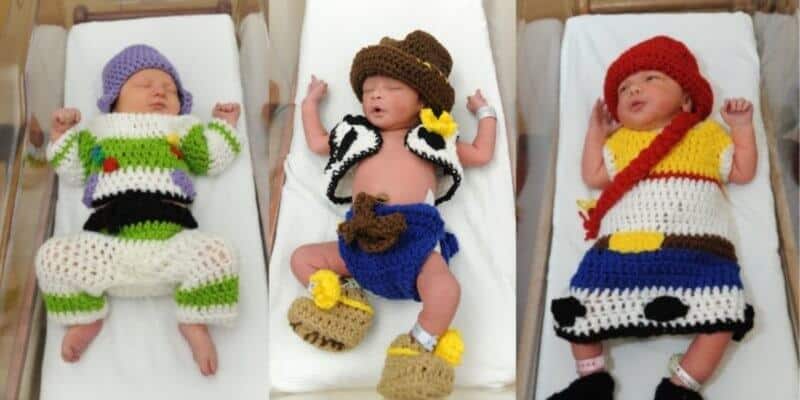 This year is a definitely a big one for one of Disney’s biggest and most beloved animated films, Toy Story. December 22, 2020, will mark 25 years since Woody, Buzz, and their gang premiered in theaters!

The movie touched so many hearts that it was no surprise that Disney brought to theaters Toy Story 2, Toy Story 3, Toy Story 4, and even an area inside Disney’s Hollywood Studios at Walt Disney World Resort and other Disney Parks around the world. There are even rumors of a potential 5th Toy Story movie!

A Pittsburgh hospital seized the opportunity to bring some joy and cuteness to the milestone of Walt Disney Studios’  Toy Story 25th anniversary. The West Penn Hospital staff dressed some of the newborn babies as Toy Story characters like Woody, Buzz Lightyear, and Jessie!

The hospital even twitted the picture of the babies in their little Toy Story knitted costumes:

“We hope that their dreams will take them to infinity and beyond, and they will always know they’ve got a friend in AHN!” West Penn Hospital said in their tweet.

Our #AHNbabies at West Penn are celebrating the upcoming 25th anniversary of @toystory! Our hope is that their dreams will take them to infinity & beyond, and they will always know they've got a friend in AHN! How many 90’s babies plan to share this classic with their littles? pic.twitter.com/TAdzM0HFpU

This hospital probably brought some warmth into every Toy Story fan’s heart with their gesture. And, if you think about it, it is no surprise that this hospital chose to celebrate this specific Disney movie anniversary. After all, Toy Story is a story about friendship, loyalty, the purity of childhood, and a kid’s relation to their toys. It’s just fitting for newborns.

This is surely the most adorable way to celebrate the babies’ birthday and Disney Pixar’s Toy Story anniversary!

Related: Twin babies had a “Toy Story”-themed photoshoot, and they’re adorable to infinity and beyond

What did you think of this hospital’s way to celebrate their love for Toy Story? What is your favorite character from Pixar’s Toy Story? Let us know in the comments below.