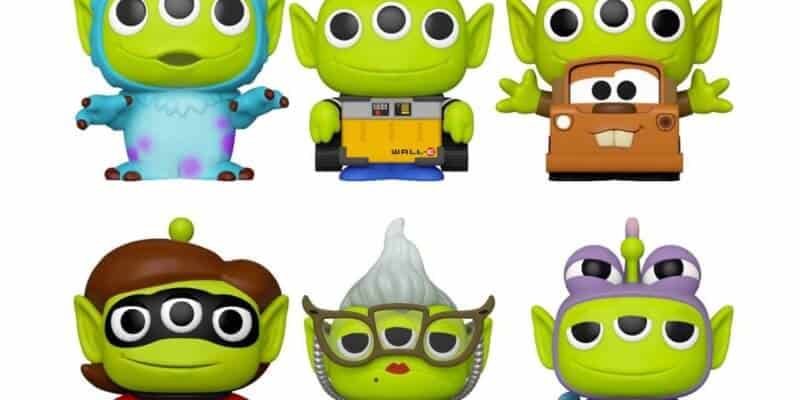 When the first wave of the Alien Toy Story Funko Pops was unleashed back in July we thought we were lucky to get such an awesome collection and that would be the end of it. Well, it would seem that if you’re a fan of the Toy Story adorable aliens then your luck hasn’t run out just yet as a brand new collection has just been released.

Once again the Pizza Planet aliens are dressing up as some of the most popular characters from various Pixar movies. The second wave includes costumes from Monsters, Inc., Wall-E, Cars, and The Incredibles. This new wave of the Alien Remix Pop Funkos really is a must for any Toy Story fan.

Let’s take a look at some of the new Pixar alien collection below:

Alien as Mater from Cars

Each of the new range of Funko Pops is retailing at $11 each and will make the perfect addition to any Disney and existing Funko collection. The worrying thing is that we have almost all of the collection from phase one of the release, now we need to get these as well!

While it is really hard to choose a favorite here, it’s hard to say no to that super cute Wall-E. While there isn’t sadly a 10-inch variant of all of the second wave of characters, there does at least appear to be keychains (retailing at $5) for most of them. Check out a couple of these below:

If you can name a Disney movie the chances are there will be a Funko Pop that’s been released in celebration of the movie. In fact, most of the time there have been many Pops attached to an individual Disney or Pixar release!

With Mickey’s Not-So-Scary Halloween Party being canceled this year, why not check out a few of the Halloween Pop Funkos that are being released. So far our favorites are the new Mickey and Minnie Mouse variants, we’ve got to get our Halloween fix somehow!

What do you think of the second phase of release of the Toy Story alien Funko Pops? Let us know in the comments below!