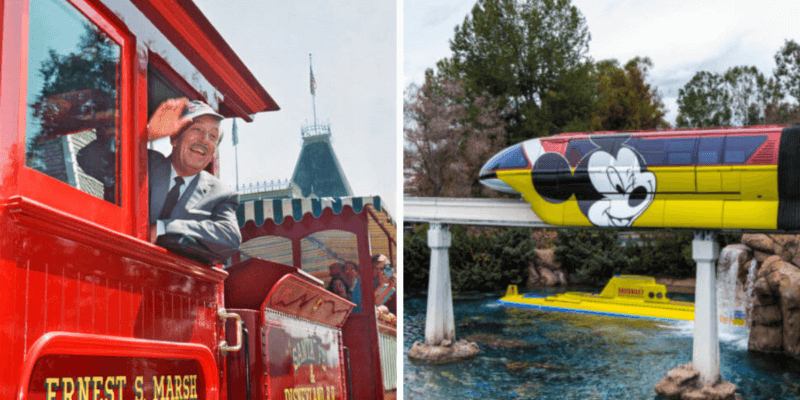 On November 3, visitors to Downtown Disney (and Disneyland fans all across the internet) got a very magical surprise! The Red Car Trolley made its way down the tracks on Buena Vista Street at DCA.

Like hearing the roar of a jet engine, or seeing a billowing smokestack and the flashing lights of a city’s nightlife, there are certain aspects of our society that automatically signal to all of us “Hey! Things are happening here! Progress of some kind is being made.” And in the case of the Disneyland Resort, those tell-tale signs include sighting the monorail pass overhead and the classic steam train chug into the Main Street station.

Honestly, who can forget the first time they drove into the parking lot and looked with wide eyes at the sleek monorail gliding either to the Downtown Disney Station (a.k.a. the old Disneyland Hotel station) or slipping over the berm towards the Matterhorn and Tomorrowland Station? And then, who can forget how your anticipation rose even higher as you got that first full look of that iconic entrance and saw the Disneyland Railroad steam into the station blowing its whistle?

We didn’t even have to ride them. As warm a welcome party as any, it was as if they dipped into the heart of the park and brought some of the magic out to us whether we were driving down Harbor Blvd. or standing in the Esplanade, like an industrial Tinker Bell sprinkling some invisible pixie dust. They reassured us in the world of today that the magic was alive and well inside the world of yesterday, tomorrow and fantasy.

That, I believe, is really all we need right now. Both Disneyland Park and Disney California Adventure are forced to remain shuttered. Disney officials keep reassuring us that they are continuing to prepare and standing by ready to reopen. But actions speak louder than words. And in this writer’s opinion, a beautiful way for Disney to show us that the magic is indeed still alive and waiting for us inside then to put the monorail and Disneyland Railroad back on the tracks.

This idea is nothing new; many Disneyland Resort Annual Passholders, fans, and Downtown Disney frequenters have pointed out that it would be great for Disney to run the monorail and train while the parks are closed, even just to give Guests something awesome to look at while they’re visiting Downtown Disney District.

Just imagine walking across the Esplanade and see that old steamer come front and center again — maybe even with a character or two in tow to greet us from a distance and seeing the monorail pass by overhead as well. Even though there will be no attractions open, just think about how magical it would be to cross onto Buena Vista Street and seeing the monorail speed above you as you walk through Disney California Adventure.

Unfortunately, the monorail and Disneyland Railroad are considered attractions rather than means of transportation. So, any chance of being able to hop aboard either is slim. But just seeing them active again, would be the proverbial motor finally turning back over, a literal sign of hope that things are alive and moving towards reopening, and just another way Disney can help spread the magic of the parks to all of us waiting ever less and less patiently outside.